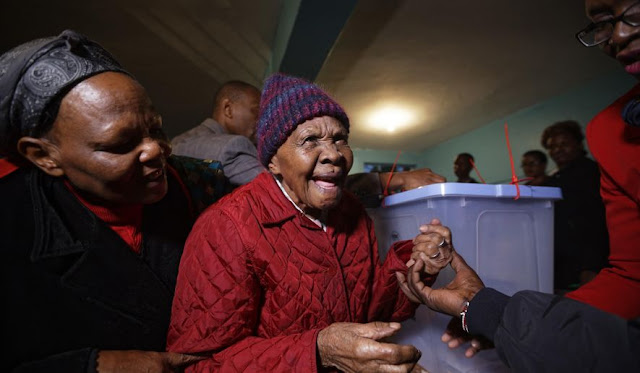 NAIROBI (Reuters) – Clutching her rosary in one hand and voting card in the other, 102-year-old Lydia Gathoni, a clear contender for Kenya’s keenest voter, queued through the night to ensure she was first in line to cast her ballot on Tuesday.
It was the same in 2013 elections, when Gathoni, a die-hard supporter of President Uhuru Kenyatta, was first to make her mark at the primary school outside Nairobi where her political hero also voted.
Wrapped in a blanket to ward off the cold and drizzle, Gathoni led election officials and fellow voters in a prayer for peace – and a Kenyatta victory – before entering the booth.
“Let God share with him the wisdom of Solomon,” she said. “Let God prevail. Let God govern the country.”
Born in 1915 when Kenya was known as the British East Africa protectorate, Gathoni was well into middle age by the time Kenya’s independence arrived in 1963 and her idol, Jomo Kenyatta, became its first president.
Her admiration has since passed to Kenyatta’s 55-year-old son, Uhuru, who is running for re-election against his veteran rival Raila Odinga, a 72-year-old former political prisoner and son of Kenya’s first vice-president.
“This woman has a loving sense for Kenyatta and his father,” said her 70-year-old grandson, Simon, a retired employee of Nairobi’s Jomo Kenyatta University.
Since 2013, Gathoni has woken at 3 a.m. every day to pray for another Kenyatta victory, he added. “She loves his boy more than ever,” he told Reuters.