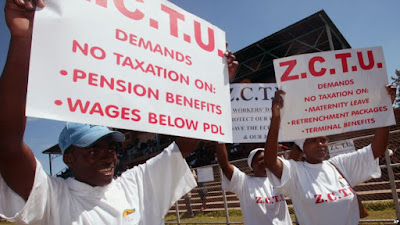 BY STAFF REPORTER
THE Zimbabwe Congress of Trade Unions (ZCTU) has volunteered to craft the opposition MDC Alliance’s election manifesto to reconnect the opposition leaders with the workers.
ZCTU president Peter Mutasa told thousands of opposition supporters at the MDC Alliance launch rally in Harare on Saturday that workers were better placed to put together a winning manifesto.
“We are on the ground as workers’ leaders and we know what the people want. If you are sincere about going back to your founding values, it would be proper for you to allow us to craft the manifesto for next year’s elections. Once the alliance has been set up, we will give you a manifesto with the issues that touch at the heart of the people,” Mutasa said.
While the MDC-T in particular has over the years sought to project itself as a social democratic party with pro-labour leanings, critics have accused the Morgan Tsvangirai-led party of dumping its labour background and adopting capitalist tendencies.
Mutasa warned opposition leaders not to lose direction once elected into power.
“Whatever happens, you must remember that once you are elected into power, it is taboo in African custom to eat your totem. Do not eat the workers once elected into power. Do not turn against labour once you have your hands on the levers of power. That is why we must continue to guide you, including through the manifesto,” the ZCTU leader said.
The envisaged alliance brings together MDC founding members Tendai Biti and Welshman Ncube, among others.
Ncube, who served as MDC’s first secretary-general, broke ranks with Tsvangirai in October 2005, accusing the former Prime Minister of being a dictator. Biti took over as secretary-general, but also broke away in 2013 questioning Tsvangirai’s leadership qualities.
Both Biti and Ncube pledged to take the opposition back to its founding values.
“We are here because we want to give the people of Zimbabwe a fighting chance at removing Mugabe. We are here to give a fresh, new beginning, to rest factory settings to our struggle,” Biti said.
Ncube concurred, saying: “We must go back to the founding values of the MDC, the founding values that we agreed at the Working People’s Convention in 1999. We must admit before you that we made mistakes along the way and we are sorry.”