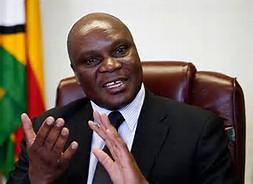 ​
BY OUR CORRESPONDENT
Mines minister Walter Chidhakwa, President Robert Mugabe's close relative, has come out in the open denouncing both G40 and Team Lacoste factions allegedly pushing factional agendas as they jostle to have their preferred candidates succeed the aged Zanu PF leader.
"If a person approaches you and asks you to pledge support someone based on a faction, tell them off. Don't entertain them, we do not want to hear about the existence of G40 or Team Lacoste.
"True Zanu PF cadres know the worth of a united party led by President Mugabe. This factionalism must end and real comrades do not waste time fighting factions," said Chidhakwa, while addressing a recent meeting at Maquadzi in Zvimba South.
Those belonging to factions, he underscored, had waived from the founding principles and ideologies of the revolutionary party.
G40 is allegedly fronted by Higher Education minister, Jonathan Moyo and Local Government minister Saviour Kasukuwere who enjoy the backing of First Lady Grace Mugabe while Team Lacoste's kingpin is Vice President Emmerson Mnangagwa. Both factions are playing political gamesmanship inorder to leverage their preferred candidate to succeed President Mugabe.
Both factions have denied harbouring such ambitions, but recent events speak for themselves.
Ironically, Chidhakwa's sentiments were echoed by Mashonaland West provincial secretary for Legal Affairs, Chrispen Saidi who said nothing was bigger than the revolutionary party for people to sow seeds of discord in the party. He urged party supporter to be united and promote peaceful development.
Chidhakwa and Saidi are locked in a bitter turf war as the latter has declared interest to run for the Zvimba South legislative seat currently held by the Zanu PF bureaucrat. LOCAL