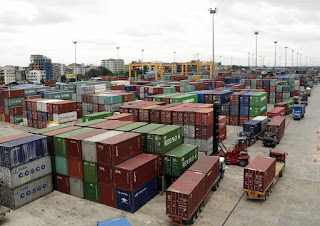 ​BY TRYNESS TEMBO in Lusaka, Zambia
THE Common Market for East and Southern Africa (COMESA) says the intra-trade ratio does not reflect an attractive position despite efforts put in place to remove barriers to facilitate increased free trade within the region.
Currently, COMESA intra-trade marginally declined from US$9.95 billion in 2013 to US$9.20 billion in 2015.
COMESA acting secretary general Kipyego Cheluget said trade among regional member states is still low hence several measures have been put in place to address the issue.
Dr Cheluget, however, said COMESA trade is still dominant and mainly with the European Union, China and America among others.
"As such; growth, employment creation, development and consequently, regional integration remain depressed. Several reasons can be put forward for the low level of intra-regional trade which include slow industrial growth, lack of marketing effort and information.
"Other reasons are strong competition from outside the region, high transport costs, weak sectorial linkages, weak linkages between small and medium entrepreneurs and large companies," he said at the 2nd ministerial committee meeting on industry recently.
Dr Cheluget also said the possibility of having a COMESA poverty-free region, which is well-integrated into the global economy, requires to link industrialisation to science, technology and innovation.He said for science to contribute to the development of the region, there is need to address the desires of the locals, stimulating knowledge production and its application among others.
Dr Cheluget said scientists in the region must also continue to innovate and to adapt technologies to meet the local needs.
"To build available capacities and nascent ones, (this) will require strong backing so that good showcases and practical scientific work is incentivised and brought to the people's attention.
"Our governments and the private sector must plan, commit and allocate funds to support science as well as technology initiatives," he said.BUSINESS