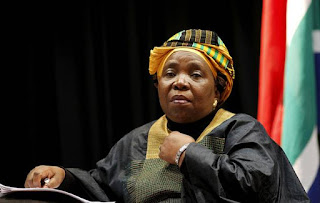 ​Strong supporters of South African President Jacob Zuma are on a provisional list of people who would run for the top positions at the African National Congress's leadership conference in December on the ticket of his former wife, Nkosazana Dlamini-Zuma, according to sources familiar with the matter.
A proposed list drawn up at a meeting late Monday includes David Mabuza, the premier of Mpumalanga province, as the choice of ANC deputy president, and Ace Magashule, the head of Free State province, as the party secretary-general, said the sources, who asked not to be identified because they aren't authorised to speak publicly on the matter.
Jessie Duarte is listed as a candidate for her current position, deputy secretary-general, along with Andile Lungisa, a former ANC youth league deputy president.
Dlamini-Zuma, the 68-year-old former chairwoman of the African Union Commission, is a front-runner for the position of ANC president along with Deputy President Cyril Ramaphosa.
Other potential challengers include Zweli Mkhize, the current ANC treasurer-general, and Lindiwe Sisulu, the country's human settlements minister.
She has echoed Zuma's calls for "radical economic transformation" to address racially based income disparities that date back to apartheid rule, while Ramaphosa, 64, has emphasized the need to stamp out corruption and foster inclusive economic growth.
- Bloomberg. TOP NEWS