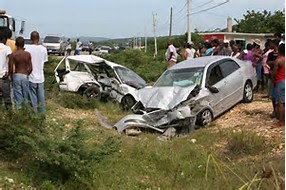 ​
BY JAMES MUONWA /ELVIS DUMBA
Scores of motorists and passengers have perished in road traffic accidents that have left many families with mammoth burdens of taking care of orphans, while in other instances families have lost bread winners. In some cases, whole families have been wiped out following ghastly crashes on our country's major highways.
In one of the stories I wrote and was published in 2014 in the NewsDay, a couple and their three children were killed in a horrific head-on accident that occurred just outside Banket. The mishap was attributed to speeding by the driver of the other vehicle coming from the opposite direction who reportedly encroached into the lane of the family's oncoming car which was returning home from a church service in Chinhoyi heading back to Mutorashanga where they lived.
A pot-pourri of theories has been expounded as social analysts try to proffer the cause of the high number of road carnages.
While police, road and traffic safety authorities have continuously, and 'naively' so, told the nation the major cause of accidents was "human error", I contend the term is too broad. It exhibits the authorities' lethargy and, maybe, lack of resources to carry out scientific investigations to establish the underlying factors that cause various carnages that continue to claim many lives.
Other causes of accidents have been pinned on the country's poor roads, defective vehicles, drunk-driving, incompetence and the so called black spot theories.
Whilst all has been said and done, I posit it that the major driver of road traffic accidents in Zimbabwe is the economic rot that in turn spawns corruption, which rears its ugly head in all facets of government departments; police and Vehicle Inspectorate Department (VID). Quasi-governmental and private organisations –Traffic Safety Council of Zimbabwe (TSCZ) and driving schools - are also complicit in the web that perpetuates the corruption surrounding the acquisition of driver's licenses and traffic policing.
In a bid to line their pockets inorder to be able to feed and clothe their families, officials from the aforementioned institutions would go to any length to get money; even if it means letting an unlicensed driver go unpunished, a defective vehicle passing through a roadblock, a visibly incompetent prospective driver being certified to dangerously navigate on our country's already poisoned highways condemned to dungeons by gaping potholes.
I respect an attempt by Michael Meki, an international road expert and former regional traffic officer for Matebeleland, for trying to go deeper to find the cause of accidents beyond the 'tired' and hollow reason of "human error" which has taken the form of a cliché.
Quoted in the Southern Eye of 13 July 2017, said Meki, "Drivers are being frustrated from one point to the other, as the number of roadblocks in Zimbabwe is too much.
"People now know that even if I don't have a license, I will just pay the policeman and pass. That has injected a wrong philosophy about driving in Zimbabwe. So, all the accidents that we see are a result of frustration."
Meki argues there was lack of professionalism by traffic cops and VID officials, who were so corrupt that the country's highways have been taken over by incompetent drivers.
While we encourage the road and traffic authorities to institute forensic investigations into each accident, police and the TSCZ safely contend human error remains the largest contributor to crashes that daily rob us of the nation's productive citizens.
According to the Zimbabwe Republic Police (ZRP)'s National Traffic Branch report of January 2017, 94 percent of accidents that occurred on the country's roads in 2016 were as a result of human error with some worst accidents being recorded along the best roads such as Harare-Plumtree highway.
TSCZ Information and Communication manager, Tatenda Chinoda bemoaned the lack of a road safety culture among road users. He argues motorists should always be conscious of risks inherent in using the road and find ways to avoid accidents.
"We continue to lose limb and life, day-in and day-out due to the same reasons. Drinking and driving, speeding and negligence, but we know the causes but we don't act to prevent them. The major stumbling block in the fight against road carnage is the road users' blame-game," he said while addressing journalists attending a recent media road safety workshop.
"It is time drivers took full responsibility of their actions on the road if we are to stop road carnage, for example some blame the road but statistics reveal the worst crashes this year occurred on the newly rehabilitated Harare-Bulawayo-Plumtree highway," he said.
According to police statistics of the period July 2017, a total of 962 people were injured, 156 people killed in 116 fatal crashes of the total 4 402 accidents recorded.
Zimbabwe is playing its part in a decade of action for road safety which seeks to reduce road deaths by 50 percent by 2020 by undertaking various initiatives such as defensive driving trainings for licensed drivers.
Harare province recorded 295 while Mashonaland West witnessed 146 fatal accidents last year alone. Matebeleland North recorded the least number with 69 recorded.
Pedestrians should also take precautions to avoid accidents and hit-and-run collisions as last year, 5 122 cases were recorded and 2 088 hit-and-run accidents were recorded and this calls for road traffic safety actors and stakeholders to galvanise all their efforts towards eradication of human error in road traffic deaths, injury and property damage.
"Usually when a road crash occurs or is reported by the media an erroneous tendency is to blame ZRP, the road, ZINARA, weather, tyres and evil spirits, the so called black spot mentality, and its time we took full responsibility of our actions. If we are to stop road carnage, I urge all drivers to take time and undertake defensive driving," Chinoda opined. OPINION