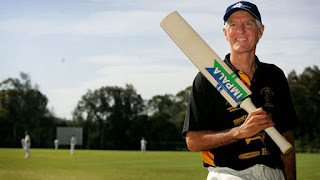 ​Bob Holland, the legspinner who in 1984 became Australia's third-oldest Test debutant of all time, has died at the age of 70. Holland had been diagnosed with an aggressive form of brain cancer in March this year.
He died on Sunday after suffering a brain bleed while in a Newcastle hospital, where he was being treated for broken ribs suffered in a fall last week. On Friday night, Holland had attended a function in his honour, hosted by former Test captain Mark Taylor.
"He had the best time of his life on Friday where he spent time with a lot of his mates at his dinner," Holland's son Craig told the Newcastle Herald on Sunday evening. "He showed no pain on the night and stayed till the end of the show. My family was amazed as we thought he might stay an hour or two."
A latecomer to first-class cricket, Holland made his debut for New South Wales at the age of 32, but still managed to accumulate 316 first-class wickets at 31.19. His Test debut came at the age of 38, against West Indies at the Gabba in 1984; the only Australians to make their Test debuts older than Holland were 46-year-olds Don Blackie and Bert Ironmonger in 1928.
He made his Test debut alongside David Boon in what was to become the memorable final Test as captain for Kim Hughes, who resigned in tears as West Indies dominated. Holland played 11 Tests and two ODIs during the mid-1980s, and twice bowled Australia to victories in SCG Tests with ten-wicket hauls.
Against West Indies in his debut series, Holland collected 10 for 144 to set up an innings win against an all-conquering team boasting Viv Richards, Clive Lloyd, Desmond Haynes, Gordon Greenidge, Richie Richardson, Malcolm Marshall, Michael Holding and Joel Garner. On an SCG surface offering plenty of turn, Holland was Player of the Match in what was West Indies' first loss in 28 Tests.
"New South Wales had played the West Indies a few weeks before that Test and beaten them," Holland told the Dandenong Leader in 2014. "So it wasn't altogether a surprise result, even though they hadn't lost for 20-odd Tests. It was fantastic for us to knock over such a great cricket team."
The following summer, Holland took 10 for 174 against New Zealand, again at the SCG. He also picked up an Ashes five-for at Lord's in 1985, when he claimed 5 for 86 in England's second innings, in what turned out to be Australia's only win of the series.
In all, Holland took 34 Test wickets at 39.76. He was also part of the New South Wales group that secured three Sheffield Shield titles during the 1980s. With the bat, Holland averaged 3.18 in Test cricket but did once manage to score a half-century in first-class cricket.(Espn) SPORTS