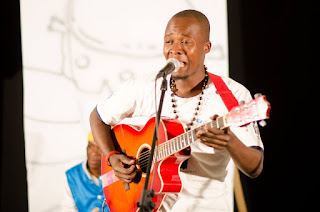 ​Dreamstar Zimbabwe Talent Show finalist, Liberty Mathole is one happy man after managing to shrug-off stiff competition to emerge among the top 10 finalist of the lucrative event held in Harare last weekend.
Mathole, a solo acoustic guitarist and vocalist, was among 10 finalists out of a talented pool of 36 artistes who participated in the show held at Long Chen Plaza. The finalists are Mathole, Taliban (dancehall MC), Blessing (musician), Footprints (full band), Super Geeks (dancers), Tsoro Arts (marimba), JT Clarence (solo dancer), Bradley Mavudzi (magician), Prosper Mapurisa (musician) and Keith Chituku (speed painter).
The finals are pencilled for the Harare International Conference Centre (HICC) on 7 October, 2017.
NewsAnchor caught up with Mathole (29), who is studying Theatre Arts at the University of Zimbabwe(UZ), to speak on the recent competition, his background and future in the arts business.
The prolific guitarist said he was ecstatic to be part of the finalists, considering the high level of competition and talent exhibited at the event.
"I am overjoyed by my progression in the competition. The guys I was competing against are richly talented and I had to take my rapporteur to the next level inorder to be among the finalists," said Mathole.
But what exactly did he play that mesmerised the judges' panel?
"Well, I played one of my own compositions and spiced up my act with one of Zimbabwe's well-remembered golden oldies, Chati Huhwi by Newman Chipeni as well as One of Us done by Osborne and Phil Collins," he said, adding he was mustering the art of engaging the audience and vocal cords management with every performance.
Mathole, a music prodigy hailing from the Midlands town of Redcliff, said he writes songs deriving inspiration from daily occurrences as well as to celebrate the creator, His creations and people.
He proffered he had devised a unique music 'formula' based on visuals which he termed 'mamGYoa' (whatever that means).
"My desire is to stir up national dialogue for critical thinking and civic engagement through my music in pursuance of Unhu/ Ubuntu and Godliness," added Mathole.
He hailed the Dreamstar organising team for their flawless logistics in putting up the event, reiterating he was looking forward to going into boot camp this Sunday ahead of the finals on October 7.
Mathole was born and bred in Redcliff and attended Rutendo Primary and Secondary Schools for his primary and Ordinary Levels before pursuing his Advanced Level at Drake High School in the same town.
He proceeded to the UZ where his conviction to be a professional artist was exhibited by enrolling for a related programme.
Mathole said he has previously recorded his works which have not seen the light of day owing to financial challenges to pay producers, market and distribute the products.
But the man is dreaming big!
"I am going to win the first prize and be able to record and release an album which will be a dream come true," said the musician.
The Dreamstar overall winner will pocket $3 000, a signed recording contract with the conveners' record label, Jacaranda Culture and Media Corporation (JCMC) Studios, a travel to China, among other prizes, while the first runner-up will get $1 500 and other benefits. Third prize will settle for $750.
The talent show was established by a trust, China Friends of Zimbabwe (CFZ) and JCMC to serve as an entertainment platform to empower local talented youths aged between 12 and 40 to help them rise to stardom.
Last year's grand prize winner was Mutare-based beat-boxer, Tafara Dondo. ENTERTAINMENT