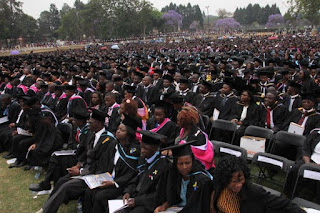 ​BY STAFF REPORTER
President Robert Mugabe's unending travels last week prompted his protocol team to force the University of Zimbabwe (UZ) to hold its annual graduation ceremony on a 48-hour notice.
Mugabe is chancellor of all State universities and presides over graduation ceremonies. He capped over 3 200 graduands last Friday before leaving for a United Nations (UN) jaunt where world leaders are meeting for a peace summit.
Sources at the university, who requested anonymity, said they were only informed of the date late Tuesday and were expected to put logistics in place for successful hosting of the event or face the full wrath of the 93-year-old leader.
When this reporter visited the university, the organising committee and ancillary staff were frantically trying to put logistics together amid a high presence of security details.
Workmen were putting fresh coats of paint on the tarmac, its verges and buildings in preparation of the visit by the nonagenarian leader. Also, streets leading to the varsity had new road markings put.
The payments office was a hive of activity as graduating students queued to clear their fees arrears which are a precondition to participate in the graduation ceremony.
Others were spotted either buying or hiring regalia.
Officials at UZ blamed Mugabe for the short notice saying this could have resulted in a low attendance by graduands, citing the current cash crisis affecting the country. There were fears scores of graduating students would not be able to attend the function. However, a huge turn-out was witnessed at the ceremony.
Although the graduation is traditionally held around this time of the year, its date is usually informed way before the event to allow the college and students to adequately prepare for it.
Efforts to get comment from UZ vice chancellor Levi Nyagura or officials from the information and publicity department were fruitless.LOCAL