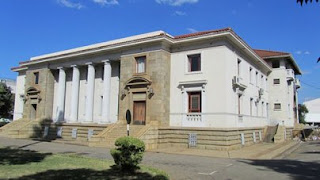 ​
BY MUNICIPAL REPORTER
The Harare City Council has come under heavy attack from residents who say they were being billed for non-existent water supplies.
Combined Harare Residents Association (CHRA) said it had noted with concern that several Harare residents who had their water disconnected years back continue to be charged for water consumption.
CHRA last week held a crisis meeting with affected households in Highfield, where they highlighted their water metres were removed by council for non-payment of bills, yet they continued to receive monthly bills for water consumption.
"We had our water supply disconnected about two years ago and the council workers also removed the water metre. By then, our water bill was around $900 and now it has gone up to almost $2 000 because every month, we are receiving a bill for water consumption yet there is not even a water meter at our house. We wonder where council is getting all these figures," said a resident.
CHRA questioned the logic behind the removal of water meters in the event that residents are disconnected from water supplies.
The unfortunate development in Highfield, which is reflective of the situation in most Harare suburbs, is clear indication that council has been using estimates to charge residents and in the process, robbing residents of their hard-earned cash, CHRA said.
Another Highfield resident, who had his water disconnected last year, said he was shocked to see council workers coming to his house last month and threatening him with water disconnections.
The residents of Highfield also complained about extortion by corrupt council employees.
CHRA is on record urging residents to resist corruption and report all corrupt council employees to relevant authorities.
During the Highfield meeting, residents complained over the process leading to water disconnections saying the Harare City Council was disconnecting them without prior notice as per the legal procedure.
In light of the challenges, CHRA has approached human rights lawyers to ensure that residents' constitutional rights to water and administrative justice are respected.
CHRA also contends that most of the amounts the residents are reported to owe the Harare City Council are largely contested as they are based on estimates.
This, therefore, justifies the need for a debt audit that would culminate in debt justice.
"We are further appalled by the fact that some of the residents who had their water disconnected years back continue to receive threats from Wellcash Debt Collectors who have been on a rampage threatening and extorting Harare residents."
CHRA said Wellcash Debt Collectors' operations were illegal and amount to extortion and we will intensify efforts to urge residents to resist them. LOCAL