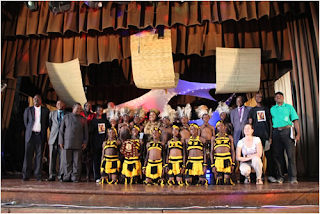 ​BY ENTERTAINMENT DESK
Preparations for this year's edition of the annual Jikinya dance provincial festivals are an advanced stage, the National Arts Council of Zimbabwe (NACZ) said in a statement this week.
Acting Communications and Marketing Manager, Cathrine Mthombeni  said the event was already being held in various district across the country in preparation for the provincial festivals that will start later this month and in October.
The first prize winning schools in their respective province will participate at the national festival that will be held on 24 November 2017 in Bulawayo.
"At all levels, schools will showcase a dance of their choice as well as the 2017/8 Festival dance of Muchongoyo. The Festival dance was introduced so that all participating children, despite their regions can learn, perform and appreciate diverse Zimbabwean cultures through dance. The dances performed should reflect some authentic traditional aspects of a particular ethnic, religious or cultural group in Zimbabwe," said Mthombeni.
Muchongoyo dance also known as Muchongolo originated from Zululand (Nguniland) in South Africa during King Tshaka's reign. Traditionally, the dance was performed in preparation for and after war, particularly when the warriors emerged victorious. Today the dance has become a social and recreational one devoid of any religious connotations. Instead, Muchongoyo is now used to highlight societal events. Muchongoyo is predominantly performed by Ndau and Shangani speaking people mostly living in Chipinge and Chimanimani in Manicaland, some parts of Chiredzi in Zimbabwe as well as in parts of Mozambique.
Jikinya aims to encourage primary school children to appreciate and perform Zimbabwean traditional dances thus promoting and safeguarding Zimbabwe's cultural heritage.
The festival is a partnership programme between NACZ and National Association of Primary Heads (NAPH) and is sponsored by Delta Corporation. ENTERTAINMENT