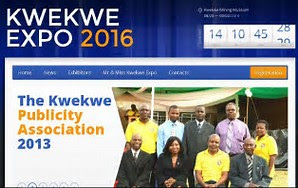 ​BY MICHAEL MAGORONGA
Preparations for the hosting of the 8th edition of the Kwekwe Expo are at an advanced stage with more than 50 exhibitors expected to showcase their products and services at the annual event.
The exposition, scheduled to run from 28 to 30 September at the Kwekwe Mining Museum, will be officially opened by the Finance and Economic Development Minister Patrick Chinamasa on 29 September.
Kwekwe Expo manager, Howard Masaninga said the economic challenges currently bedevilling the nation will not dampen the annual event as most exhibitors had confirmed participation at the showcase.
The response from both exhibitors, he added, was overwhelming given the fragile economic outlook.
"Traditional exhibitors like Haggie, Busy Network, Zimbabwe Revenue Authority (Zimra), police, Environmental Management Agency (Ema), National Social Security Authority (Nssa), Kwelaz FM, Big Cool, have already confirmed their participation. We also have our regular sponsors like the Reserve Bank of Zimbabwe who confirmed bankrolling the event. Regrettably, some funders bowed out due to the adverse economic pressure," Masaninga said.
"Most of our traditional exhibitors have already confirmed their bookings and I am glad to announce that we expect to have all our stands, both inside and outside the venue, to be occupied."
The expo manager also said a business indaba will be held at Golden Mile Hotel prior to the official opening.
"The Minister will meet the business community at an indaba scheduled for Golden Mile. The indaba is aimed at appraising the minister on challenges the local business people are facing given Kwekwe is an industrial hub, key to economic turnaround," said Masaninga.
The conveners were expecting a better show as this year mobilising will be targeting the general public instead of the exhibitors alone.
"We have discovered that we have been giving too much emphasis on exhibitors while the general public remained passive. Road shows meant for mobilising for the general public are lined up in the not-so-distant future to try and encourage the general public to attend the expo," said Masaninga.
He added, "We want to demystify the thinking that Kwekwe Expo or such like shows are for the business elite by engaging the public and school children who can utilise the show for their educational purposes."
In that regard, darts and pool competitions were also introduced, in a quest to increase public participation during the three day event.
With regards to entertainment, Masaninga said Dendera crooner, Sulumani Chimbetu will headline a cast that includes various local artists like On One B, Mbada Sounds, Killaman, amongst other local artists.
"There will also be a modelling competition where Miss and Mr Kwekwe Expo will be crowned as per our norm. Already we have more than 20 contestants including boys, who have registered to contest and are already undergoing grooming. We are still expecting more though," added Masaninga.
The expo is the city's own version of Harare Agricultural Show where exhibitors include companies showcase services and products they offer to the general public, amid pomp and funfair.
The expo, launched in 2011, is organised by Kwekwe Publicity Association in conjunction with Kwekwe City Council.BUSINESS