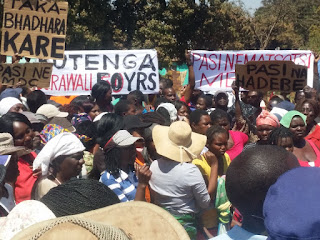 ​BY JAMES MUONWA
Scores of angry residents of Dzivarasekwa last week protested against the decision by the Harare City Council to evict them from council rented houses.
Earlier, there were clashes between the residents and Harare Municipal police officers as the former resisted orders to vacate their houses.
A community meeting meant to deliberate on the issue of the evictions and map a possible way forward was hijacked and turned into a political campaign platform.
The residents were first addressed by Ward 39 Councillor, Gilbert Hadebe (MDC-T) who hinted the impending evictions were political as the country hurtles towards the 2018 elections.
He said the intended move did not necessarily reflect council's policy.
Not to be outdone, the Member of Parliament for Dzivarasekwa, Omega Hungwe (Zanu PF) addressed the meeting and blamed "the MDC-T controlled council" for approving the eviction of the residents.
In her address, Hungwe told the residents to vote wisely in 2018, in a clear sign that she had taken advantage of the meeting to campaign for Zanu (PF) candidates.
In a Press statement, the Combined Harare Residents Association (CHRA) said it was concerned that the plight of the affected residents was being politicised.
"The of issue concerning residents has apparently been hijacked by political hawks seeking to sway potential voters ahead of the 2018 polls," the residents' representative body said.
"CHRA is a non-partisan association of residents and as such, we abhor any partisan or political approach to issues affecting residents.
"We implore politicians to desist from hijacking the residents' agenda for selfish political gains. CHRA reiterates that a non-partisan and collective approach is critical a far as resolving issues facing Harare residents is concerned.
"In light of the impending evictions in Dzivarasekwa, CHRA implores the Harare City Council to consider all the relevant circumstances before approving any form of eviction."
Added CHRA, "We will be engaging human rights lawyers to ensure that due course is followed before the evictions are carried out and above all, to protect residents' constitutional right to shelter and freedom from arbitrary evictions.
CHRA said it was mobilizing residents who owe council to approach the local authority and agree on payment plans. LOCAL NEWS