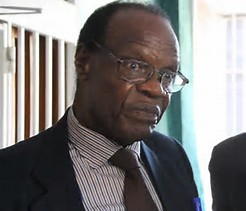 ​BY STAFF REPORTER
The Registrar General, Tobaiwa Mudede's office early this week started issuing free national identity cards, birth, death and citizenship certificates following an approval by government to freeze charging statutory fees for 90 days.
The documents which cost between $5 and $10 will be given out free until November 30.
The exercise runs concurrently with the voter registration being spearheaded by the Zimbabwe Electoral Commission (Zec).
Government granted permission to Mudede's office to allow citizens to get the important documents as well as replace lost or damaged ones ahead of watershed harmonised elections in 2018.
Documents will be issued in all the country's 63 districts.
"Authority has been granted for the waiver of fees by Treasury on Tuesday 19 September 2017. The waiver is in terms of Section 78 (I) of the Public Finance Management Act (Chapter 22:09) and will cover the following; national identity documents, death certificates and citizenship by descent," said Mudede.LOCAL