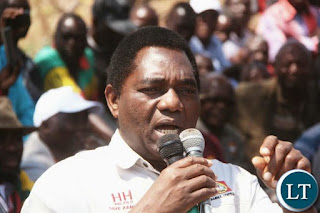 ​United Party for National Development President Hakainde Hichilema this week addressed a well-attended rally at Mbila in Itezhi Itezhi district, Central Province.
Hichilema in his address to the people of Mbila area, announced that he remains committed to ensuring a united, prosperous and equitable Zambia, devoid of violence and hate.
And the UPND leader has called on the country to unite more than before and stop any possible injustices as is the case now, in order to foster development.
Hichilema also thanked the people, the church, the civil society organisations and the international community for standing up for him when he was arrested and detained on flimsy charges.
And Hichilema has committed that he will use his 127 days incarceration to turn around the country's future especially economic emancipation and governance.
The president of the UPND is on firm ground that he holds no grudge against those who engineered his arrest, arrested and detained him for 127 days as he believes that if he is to pay back by punishing them, the country would not see the difference between him and those who tortured and brutalised him.
And the UPND president who is in Itezhi Itezhi to drum up support for the Party Council Chairperson candidate, Shalooba, appealed to the people of Mbila area to vote for UPND in the elections while emphasising that UPND will provide exceptional leadership across all sectors of governance that is before, during and after being in government.
Hichilema was accompanied by the party chairperson, Mutale Nalumango who also stated that there was need to restore the rule and law in the country.
Alliance Democracy for Development (ADD), Charles Milupi called on the Mbila people to pray for the UPND president and the party in order to continue with the struggle for the country's democracy.INTERNATIONAL