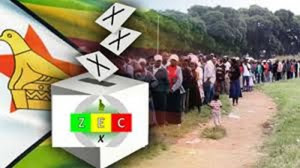 ​BY STAFF REPORTER
The biometric voter registration exercise has kicked off at 63 centres countrywide as the Zimbabwe Electoral Commission (ZEC) moves to craft a new voters' roll that would be used in harmonised elections scheduled for next year, and beyond.
Biometric technology will apply only for voter registration and Zec will revert to the manual system during the actual election which will take place next year on a date to be gazetted.
Last week, President Robert Mugabe was registered under the new system that will see the country adopt the new technology.
The exercise is a precursor to the massive voter registration blitz to be rolled out next month when Zec takes delivery of the remaining 2 600 Biometric Voter Registration (BVR) kits, official reports say.
As of now, Zec has received 400 kits which it is using to train technicians as well as use for the fore-running exercise.
Every Zimbabwean who intends to vote in next year's election is required to register afresh to appear on the new voters' roll.
Prospective voters are required to register to vote nearest to their homes, as voting in the 2018 elections is going to be polling station-based.
In a recent statement, ZEC chief elections officer, Constance Chigwamba said registration of voters would take place at the electoral body's 63 districts.
Chigwamba said documents required for one to register to vote are a national identity card (both metal or plastic or waiting pass with the holder's picture), a valid passport and proof of residence.
Speaking during the launch of the BVR equipment at State House last week, ZEC chairperson Justice Rita Makarau said her organisation was ready to conduct biometric voter registration.
She said the BVR technology will capture a person's fingerprints, facial features, and identity card details to rule out any chances of double voting.
Justice Makarau said the start of the voter registration exercise is a historic occasion and encouraged all Zimbabweans to register to vote.
Meanwhile , official State media reported that a high-level Zanu-PF Elections Directorate, composed of senior Politburo members, is seized with the party's 2018 election roadmap which is targeting a robust winning strategy that encompasses voter registration, mobilisation, research and drafting a manifesto.
The organ, led by the party's national Secretary for Administration, Dr Ignatius Chombo, last week spearheaded nationwide meetings which adopted tactics on conducting educational campaigns on voter registration.
Zanu PF is targeting over five million votes during the upcoming harmonised polls.
Part of the strategy entails ensuring all current members in various structures register to vote, while a massive drive to lure first-time youth voters is also being rolled out.
The strategy targets, among others, students at higher and tertiary institutions, who constitute a large chunk of new voters.
A Politburo committee made up of technocrats has already been established to draft an election campaign manifesto whose message will centre on economic revival, peace and stability, employment creation and development, among other issues.
The manifesto will also focus on engineering economic success through home-grown solutions such as the Command Agriculture programme.
Zanu-PF Youth League Secretary, Kudzanayi Chipanga said the youth are the mainly targeted new voters in next year's poll.
He said as part of the Youth League's strategy to lure voters, the organ would conduct visits in all provinces to follow up on the success of the Presidential Youth Interface Rallies.
About 5 874 115 people registered to vote in the 2013 plebiscite.
Of these, 3 480 047 cast ballots in the Presidential poll, while 3 377 276 participated in parliamentary elections. The number of registered voters in 2008 was 5 934 768. TOP NEWS