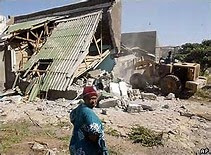 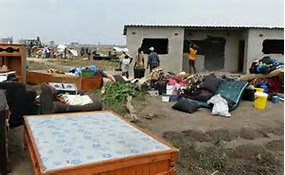 BY MUNICIPAL REPORTER
Apparently jerked by President Robert Mugabe's call to normalise activities in the capital, the Harare City Council this week  razed down an estimated 700 houses and makeshift structures in Eyestone suburb  in Harare South, with affected residents complaining they were not warned on time of the action.
Mugabe recently lashed out at city authorities for letting lawlessness prevail in the city and called for immediate corrective action.
The houses and cabins, some made out of plastic sheeting, were deemed illegal by the authorities who maintained people settled in the area illegally.
Some of the affected settlers interviewed by our news crew said they were shocked by council's arbitrary action, especially coming as the onset of the rainy season fast approaches.
Council's corporate communications manager, Michael Chideme maintained the houses had to be razed down as they were built on undesignated land. He argued council had sought legal recourse to carry out the demolition exercise.
"We have all the necessary papers to remove those people. These structures were illegally built. 700 (houses) have been demolished, this is council land and it has to be properly planned (for)," he said.
Last year, City of Harare approached the High Court seeking eviction and demolition orders, accusing the members of  housing cooperatives of failing to comply with the city's laws and regulations.
"We were never given any warning. If they had told us a week before or even in the morning, I would not have left for work. I had to be phoned by my neighbours and I rushed here only to find them already knocking down our house. These stands were advertised by Government Workers Association and we signed contracts and paid our money, never knowing it would end up like this," an affected resident told the media.
Most of the affected residents said after buying the stands through various co-operatives, they later signed affiliation forms to join Harare South Housing Apex Cooperative Society. However, the society's chairperson, Tonderai Nkomo, said he wasn't aware of how the stands were parcelled out.
"We never gave out stands there. These are people who were short-changed by other dubious co-operatives and we took it upon ourselves to represent them and made them pay a fee to be affiliated to us. We have been in and out of courts over the issue. Last week, we were told council cannot just demolish without showing us a court order allowing the demolition, but today they didn't even want to hear of it; they just demolished," Nkomo was quoted saying.
Vice chairperson of Mvurachenachena Housing Co-operative Mr Evans Shava said he was taken aback by the demolitions.
"We were given this land by the Civil Aviation Authority of Zimbabwe(CAAZ) and Local Government in 2012. Last year, they (council) came to demolish our houses again and we went to court. We are also shocked that this is happening, we will go back to court," he said.
Our news crew visited Eyestone and witnessed scores of families living in the open without proper ablutions facilities. Their belongings were strewn all over evidently without a clue of their next move. Most affected households said they had nowhere to go to and needed humanitarian assistance in the form of shelter and foodstuffs.
The demolition job is reminiscent of the internationally-condemned 2005 government exercise code-named 'Operation Murambatsvina/ Drive Out Trash' ostensibly carried out to rid cities and towns of slums which left an estimated 700 000 internally displaced citizens, according to United Nations figures. TOP NEWS