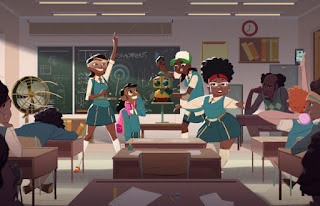 LEADING kids' entertainment specialist CAKE has announced its partnership with South Africa's Triggerfish Animation Studios to co-produce comedy action series Mama K's Super 4.
Triggerfish, whose credits include Adventures in Zambezia and Khumba as well as Stick Man and Revolting Rhymes, will partner with CAKE to further develop, finance and produce the 26 x 22 minute 2D animated series, with CAKE ultimately leading the international roll out and distribution.
Aimed at six to 11-year-olds, Mama K's Super 4 is set in Lusaka, where four teenage girls are recruited by former secret agent Mama K to help her save the world.
"Fighting rich and powerful opponents with limited resources means Mama K's Super 4 will have to be smart and resourceful in a show in which taking down the bad guys and turning in your homework is all in a day's work," according to statement released this week.
Created by Zambian writer Malenga Mulendema, Mama K's Super 4 pays comic homage to the superhero genre and draws visual inspiration from retro 90's RnB and hip hop girl groups.
"We have been admiring Triggerfish's work for some time now and are delighted to have been invited to join Mama K's Super 4, a unique and entertaining project which brings a fresh look and approach to a classic action cartoon format," says Tom van Waveren, CAKE chief executive officer and creative director.
And Triggerfish head of development, Anthony Silverston said: "Mama K's Super 4 stood out among hundreds of TV shows that we reviewed during the Triggerfish Story Lab, a continent-wide call for animated projects. In her pitch, Malenga said that, growing up, she'd never seen herself reflected on screen in an animated show, and with CAKE, we're glad to have found a bold partner who has embraced her vision for a show centred on four innovative African girls."
CAKE, based in London, is one of the world's leading independent entertainment companies specialising in the production, distribution, development, financing and brand development of kids' and family properties while Triggerfish Animation Studios is a Cape Town-based film and entertainment company established in 1996.
The studio has produced two feature films – Adventures in Zambezia (2012), starring Jeremy Suarez, Abigail Breslin and Samuel L. Jackson, and Khumba (2013), starring Jake T. Austin, AnnaSophia Robb and Liam Neeson.-Online. ENTERTAINMENT