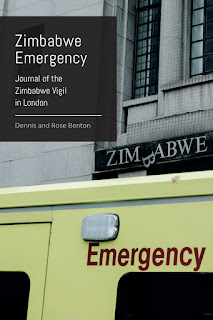 ​The cover of the book 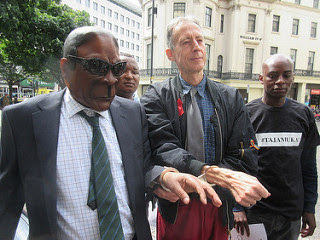 
Mugabe (played by Fungayi Mabhunu in our Mugabe mask)
at the Vigil in August last year is 'chained' to Thatchell.


BY STAFF REPORTER
Disgruntled Zimbabweans, running away from the debilitating effects of the economic ruin by President Robert Mugabe's administration, will this weekend mark 15 years of lobbying for democratic change in the former breadbasket of Africa.
Running under the banner of ZimVigil, the group will celebrate its anniversary on Saturday 14 October with a peaceful demonstration outside the Zimbabwe Embassy offices in London.
As part of the commemoration, ZimVigil has published a book titled 'Zimbabwe Emergency' chronicling its weekly activities and also records unfolding events in Zimbabwe through the Diasporans' lenses
Said ZimVigil in a statement; "To mark the anniversary we have published a book based on our weekly diaries: 'Zimbabwe Emergency', which records how events in Zimbabwe have unfolded over the years as seen by the diaspora in the UK. It chronicles the economic disintegration, violence, growing oppression and political manoeuvring – and the tragic human cost involved.
"It is available at the Vigil for £10. All proceeds will go to the Vigil's and our sister organisation the Restoration of Human Rights in Zimbabwe's work in Zimbabwe. The book is also available on Amazon. Rights activist Peter Thatchell is coming to receive a copy of the Vigil book. Peter is a tireless human rights campaigner who has attempted to arrest Mugabe in the past and been beaten up by Mugabe's security guards."
Thatchell was manhandled and left for dead by Mugabe's rogue security details after he attempted to push for his arrest in London over his suppression of gay rights. POLITICS