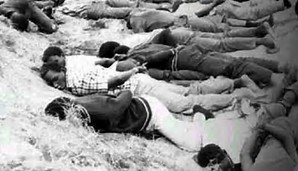 ​
The Crisis in Zimbabwe Coalition is deeply concerned with the disruption of a prayer meeting by the police that was scheduled for Bhalagwe on Saturday 21 October 2017 under the theme: 'Dispossessed in Life and Dishonored in Death: Bhalagwe Victims Remembered 2017.'
Bhalagwe is a mass grave where thousands of people were reportedly killed or buried alive by the North Korea-trained Fifth Brigade during Gukurahundi.
The prayer meeting was organised by Bulawayo-based CSO, Ibhetshu likaZulu, and was set to be a memorial service for victims of Gukurahundi massacres at Bhalagwe in Maphisa. The police have been notorious for cancelling similar events since 2011 and their actions continue to confirm that they are a captured institution.
As CiZC we contend that the practise of memorialization is one of the many avenues that seek to bring closure to victims and survivors of gross human rights abuses and survivors of genocide. The practise of memorialization is a global concept, with countries such as Rwanda annually holding memorials for victims of genocide while in Germany Holocaust denialism is a criminal offense.
In our view the foiled prayer meeting was not only legal but is in line with national principles of good governance enshrined in the Constitution that seek to foster national unity, peace and stability.  In the same vein we view actions of those that seek to deny justice for victims and survivors of the Gukurahundi genocide as criminal and infringing on individual and group rights to assemble and express themselves. The actions of the police can only be interpreted as expressing their support for the state sponsored inhumane killings of the 1980s.
The recent actions of the police under instruction from the state which continues to pay lip-service to the Gukurahundi massacres are deplorable and a grave concern for the justice order in Zimbabwe. We note that 30 years later, the Executive has not acknowledged these inhumane killings neither has it made a public apology to the affected families.
We are worried that the state and its agents have been consistent in intimidating already fragile and traumatized populations in the Matabeleland and Midlands regions by promising to unleash similar violence during electoral periods.
We are equally concerned that numerous public programmes meant to bring closure to the massacres continue to be foiled by the state, cases being the foiled Organ on National Healing, Reconciliation and Integration and currently the National Peace and Reconciliation Commission, which has spent half of its 10 year tenure before being operationalized.
We call upon the government of Zimbabwe to immediately:
Develop through inclusive consultations and roll out a citizen centred National Healing and Reconciliation programme that should be built around: Transparency, Truth and Truth Telling, Justice, Respect for the constitution, human rights and rule of law
Outlaw Gukurahundi denialism and apply lustration on all past and present violators from holding positions of authority on the National Peace and Reconciliation Commission
Restore the institutional integrity of the Zimbabwe Police Services through a Depoliticisation programme that is built on diversity and inclusion
Allow civil society to undertake initiatives that seek to foster reconciliation in our society and advocacy for the redress of past and current injustices.-CiZC. OPINION