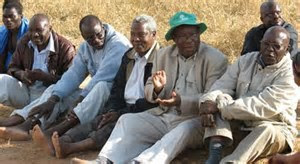 BY JAMES MUONWA
Some former and serving senior Zanu PF and government officials should be arrested for misleading the nation into believing pure diesel was oozing out of a rock at a shrine in Chinhoyi as the prank was a well-orchestrated "sinister" plot hatched by the top officials to oust President Robert Mugabe, a traditional leader has said.
Speaking to NewsAnchor in an exclusive interview at his Lions' Den home, Chief Milton Nemakonde alleged Zanu PF bigwigs, among them then State Security minister Didymus Mutasa (now fronting a splinter opposition Zimbabwe People First party), had a "sinister motive" when he lied to the country's Presidium that pure diesel was coming out of the sacred Maningwe Hills despite the chief's denial such a thing could occur in his jurisdiction.
The chief singled out Mutasa for attack, saying the fiasco was designed to cause disaffection for the nonagenarian leader.
"I told them the whole thing about diesel was fake. The so-called spirit medium was also dubious and this angered Mutasa who had tried to force me to enter the shrine but I refused to be part of the plot…it was sinister and crafted to topple Mugabe.
"What I knew about the hill was that there was a fuel tank that was mounted during the liberation struggle and around 1979 helicopters used to refuel there. I argued there was no diesel oozing out of the hills but it could be trickery by some people who had actually poured fuel into the disused tank.
"For refusing to grace the farcical fuel find, the minister (Mutasa) told me in the face that I would never get land," said the outspoken chief, who said he notified President Mugabe of the incident. Mugabe, he said, never acted on that information.
Efforts to get comment from Mutasa were fruitless at the time of writing.
Ironically, Chief Nemakonde is embroiled in a protracted land dispute over Pondoro farm with a white commercial farmer and probably is the only traditional leader in the country without a farm.
The infamous 'diesel n'anga' Rotina Mavhunga, alias Sekuru Mboni, was arrested in 2010 after she allegedly duped Cabinet ministers in 2007 into believing refined diesel was coming out of a rock. The mystic figure-turned-con artist Mavhunga, also known as Nomatter Tagarira, was arrested at a farm outside Chinhoyi were she was holed up.
Mavhunga then aged 35 was in September 2010 slapped with a 27-month prison term by then Chinhoyi Magistrate Ignatius Mugova, who found her guilty of defrauding government and supplying false information to senior officials who included ministers Mutasa, Sydney Sekeramayi (then Defence), Kembo Mohadi (Home Affairs) and late former Mashonaland West governor Nelson Samkange. Deputy police commissioner-general Godwin Matanga and the late former Zanu PF Mashonaland West chairman John Mafa were also part of the entourage.
In his judgement, the magistrate castigated Registrar-General Tobaiwa Mudede for harbouring a wanted criminal. Although Mudede was implicated in the scandal he was never arrested or brought to testify in court. Mudede allegedly supplied Mavhunga with 250litres of diesel which the bogus traditional healer used to dupe Cabinet ministers, who reportedly danced barefooted and clapped hands in reverence of the n'anga at the shrine.
Mavhunga reportedly got four buffaloes, a vehicle and billions of Zimbabwe dollars for leading government on what the magistrate termed "a wild goose chase."
During her pranks, Mavhunga once commandeered a 50-strong convoy to Makuti and Kariba and had a helicopter dispatched from Harare when the country's fuel shortages were at the peak. Mavhunga was released from Chinhoyi Prison after serving her full jail term. TOP NEWS