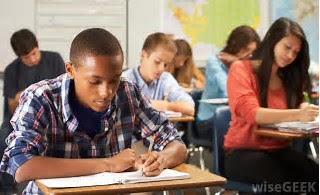 NEWS DESK
The Zimbabwe School Examinations Council (Zimsec) has dismissed as a hoax the 'leaked' Mathematics November 2017 examination paper in circulation.
The said exam paper never leaked and the images of the supposed examination paper which has gone viral on social media platforms were fake.
Scores of pupils across the country allegedly fell prey to the con-artistes who recorded brisk business selling the fake exam for as high as $300.
Zimsec spokesperson, Nicky Dlamini dismissed the rumours that it was an original examination paper and said some con artistes were capitalising on cheats who wanted to have access to the paper.
This week, social media was awash, particularly WhatsApp, with news of the "leaked examination paper."
Said Dhlamini: "It serves them right. It is these fools who think they are smart and want to cheat the system. The bogus businesspeople are targeting those people that want the shorter route to success. We actually have a copy of this so called leaked Mathematics paper. It is a fake. It is unfortunate that this raises fear and alarm among diligent and honest candidates, however, they should not worry because the original Zimsec papers are all safe and secure."
Dhlamini assured the public the Zimsec exams system was water-tight and made it almost impossible to have leaks.
The examination council had not started distributing the Ordinary Level examination papers to centres as yet, she further said.
"We just started rolling out Grade Seven examination papers, we haven't yet started on O' Level. People must not be fooled," she said.
Dlamini advised the public to desist from being tempted to cheat the examination system as she said there were dire consequences. LOCAL