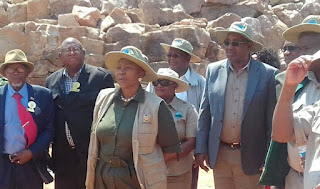 ​Environment, Water and Climate minister and officials during a recent tour

Government has reaffirmed its commitment to the construction of the Gwayi Shangani dam which will cost $114 million.
The dam, which will be third largest inland project in the country after Tokwe Mukosi and Lake Mutirikwi, is expected to be completed in 36 months.
The update on the dam construction was revealed during an assessment tour by the Environment, Water and Climate minister, Oppah Muchinguri-Kashiri.
The contractor is already on site to ensure that they complete laying the foundation of the dam before the onset of the rainy season. Some equipment which is required for the foundation is, however, still on its way from China.
A team of engineers said treasury is expected to avail more funding to complete the current phase which requires $20 million.
"So far they have given us $5 million which we intend to use to raise the foundation up to the original ground level, then after that, we will go up four metres which requires up to $20 million," Zinwa chief engineer, Canaan Maruvenje said.
"This is dam requires a lot of resources because as you can see, because it is purely concrete, 200 000 cubic metres of concrete is required for us to complete this dam," Zinwa assistant resident engineer, Brian Musarurwa said.
The Environment minister promised the local leadership that her ministry has crafted a mechanism which will see the local community having access to the water at various points and ensure that locals are given priority in terms of employment.
"It is a government policy that every time when we construct a dam, we leave valves so that communities can benefit. We did that in Pungwe and in Mtshabezi, so this is what we are going to do here as well," said Muchinguri.
The Gwayi Shangani Dam will have a capacity of 635 million cubic metres of water which will turn the region into a green zone.
The cost of the pipeline which will supply water from the dam to Bulawayo, will be revealed once the feasibility studies have been completed.Online.LOCAL