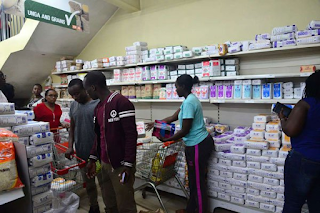 Kenyans shop at Naivas supermarket in Kasarani, Nairobi, on October 25, 2017 ahead of the election. Most supermarkets recorded high sales.​

BY JAMES KAHONGEH
Nairobi residents engaged in panic buying on Wednesday as the country prepared for Thursday's election.
Most supermarkets in the city and its environs recorded a high number of shoppers who were mostly stocking foodstuff and other essentials.
A spot check at various supermarkets showed the items Kenyans were buying in bulk: maize and wheat flour, cooking oil, sugar, rice, long-life milk, groceries, drinking water and toilet paper.
CUSTOMERS
Naivas and Powerstar supermarkets in Kasarani were teeming with shoppers.
"Most of our customers usually shop in the evening after work and during the weekend.
"But, today has been different as shoppers started coming in from as early as 8.30am when we opened.
"We have been stuffing the shelves since morning. We don't have more cooking oil stock besides what is in the shelves," an attendant at Powerstar Supermarket said.
PROFIT
There was also heightened shopping activity at Naivas supermarket with attendants saying they had sold more maize flour on Tuesday and Wednesday than they usually sell in two weeks on ordinary days.
Speaking to the Nation, Naivas Chief Operating Officer Willy Kimani confirmed the sudden boom in business.
He said the store had recorded almost a 40 per cent rise in sales this week, and attributed the scenario to the uncertainty surrounding Thursday's repeat presidential election.
"Most of our branches all over the country have reported high sales.
"Unlike in August when we were caught off-guard, this time around we had anticipated that Kenyans would engage in panic buying and, therefore, stocked adequately, especially basic commodities.
"Our branches will close only for a day (today) and reopen on Friday," Mr Kimani said.
PEACE
Ms Jane Njeri, a resident of Mwiki in Kasarani, said she was hopeful that there would be peace during and after the election.
"I do not anticipate instability after the election, but I have bought enough foodstuff for my family just in case things don't go well," she said.
At the Game store at Garden City mall, most shelves for fresh vegetables, bread, milk and water had been cleared by 4pm today.
FOOD
The management said they would have to restock most items after reopening later this week.
Tuskys supermarket branches on Tom Mboya Street and Kenyatta Avenue in Nairobi recorded an equally high number of shoppers as Kenyans engaged in a last-minute shopping.
A section of Kenyans was buying foodstuff and other essentials as they prepared to leave the city for upcountry. POLITICS