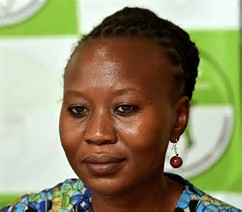 A senior member of Kenya's Independent  Electoral Commission (IEBC) has fled to the United States amid death threats ahead of next week's presidential election re-run.
Roselyn Akombe said the IEBC was under political "siege", and was unable to reach consensus or take any decisions.
The IEBC said it regretted her decision to quit, while its chairman conceded that he could not guarantee that the poll would be credible.
Last week, opposition leader Raila Odinga pulled out of the vote.
The Supreme Court annulled the result of the original 8 August poll, when current President Uhuru Kenyatta was declared winner, after finding irregularities and illegalities.
IEBC chairman, Wafula Chebukati said he regretted Akombe's decision to quit and warned Kenya's political leaders not to "interfere with the process."
Speaking to the media from New York, Akombe recalled the murder of the election commission's IT head, Chris Msando, before the August poll.
"You'll be suicidal to think that nothing will happen to you," she said.
"I have never felt the kind of fear that I felt in my own country," Akombe told the BBC.
Can the election proceed?
In a statement, Akombe said she had agonised over the decision to leave the IEBC because "the commission in its current state can surely not guarantee a credible election."
"There is a very high likelihood that the mistakes that some of the presiding officers made during the last election will be repeated," she said.
She said IEBC members had been voting along partisan lines, without discussing different issues on merit.
Commissioners and other IEBC personnel were facing intimidation by political actors and protesters, Akombe said.
She added that the death threats were anonymous threats, and she had been put under pressure to resign.
She said she did not "feel safe enough to be able to go home" in the foreseeable future.
It is a big blow for the beleaguered commission, whose credibility had already taken a big hit after the Supreme Court annulled the 8 August election.
Akombe's revelation that the commission is beset by internal wrangles and is pliable to partisan interests dispels any illusion that it is an independent body.
She also questioned the commission's leadership, saying Chebukati was ineffectual.
Chebukati has given credence to this view.
"I've made several attempts to make critical changes but all my motions have been defeated by a majority of the commissioners,""AFP news agency has quoted him as saying.
"Under such conditions, it's difficult to guarantee a free, fair and credible election."
It is hard to imagine that the commission will recover from its problems to organise a credible election.
When it settled on 26 October as the date for the repeat election, President Kenyatta's supporters were quick to point out that it was also his birthday.
It seems right now that the only thing that is certain is that Kenyatta will turn 56.
What does the president say?
He has not yet commented on Akombe's resignation or Chebukati's criticisms.
Instead, he has called on the nation to spend the weekend in an "extended period of prayer and reconciliation."
"We walk towards the declared date of the 26th of October both as a God-fearing leadership and government," Kenyatta said in a televised speech.
He has been criss-crossing the country as part of his election campaign, insisting that the poll will go ahead.
The IEBC has said that Odinga's name will remain on the ballot paper, arguing that he has not filled in a legally required form to inform it of his decision to pull out.
Odinga insists that he does not need to fill in the form, and has organised mass protests to demand electoral reforms before a re-run is held.
The IEBC also says that the names of five minor candidates - who obtained about 1% of the vote between them in the August poll - would appear on the ballot paper. A sixth minor candidate has been declared bankrupt since the August poll, disqualifying him from running again.
The electoral commission said Kenyatta had won the August vote by a margin of 1.4 million votes - or 54% of the total, compared to Odinga's 45%.
Could there be unrest?
Human rights groups say about 70 people have been killed in protests since the August poll, and police were "directly implicated" in 33 of the deaths in the capital, Nairobi.
The violence is nowhere near that seen in Kenya after disputed polls in 2007, when at least 1,200 people were killed.
In parts of western Kenya which back Odinga, election officials have been intimidated, raising fears of more trouble on election day.
"Demonstrations will continue. October 26 will be the biggest demonstration of them all," Odinga told thousands of supporters in Nairobi on Wednesday.-Online. POLITICS