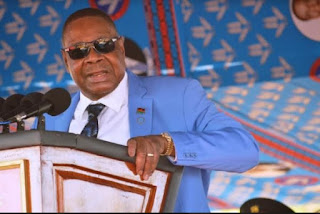 At least five people have been killed in southern Malawi after they were accused of behaving like vampires.
The UN says it has pulled staff out of two districts as the vampire scare sweeps across the south of the country.
According to reports, the victims were killed by vigilante mobs who suspected them of drinking human blood as part of magic rituals.
A night-time curfew has been imposed by the government to prevent any more deaths.
The curfew restricts movement to 10 hours a day, from 07:00 until 17:00 local time.
The UN said in a report that the vampirism rumours appear to have originated from Mozambique, and spread across the border to the Malawi districts of Mulanje and Phalombe.
It is unclear what sparked the fears, but - according to a UN report seen by news agency Reuters - villagers had set up road blocks as they tried to hunt the "vampires" down.
As a result, it had instructed all staff to temporarily relocate to a safer area.
Malawian President Peter Mutharika has vowed to launch an investigation into the killings, with his office releasing an official statement saying the matter was  "of grave concern to the entire government."
Belief in witchcraft widespread. A spate of vigilante violence linked to vampire rumours also erupted there in 2002.
President Mutharika on Tuesday condemned the vigilante mobs summarily executing people suspected of being "blood-sucking" vampires, saying it is affecting development in the concerned districts.
Mutharika says reports on violence emanating from bloodsuckers' myth are distressing and agonizing.
Mutharika broke his silence on the matter on Tuesday during a political rally held at Kaliyeka primary school ground ahead of the October 17 by elections, as he canvassed votes for the Democratic Progressive Party (DPP) parliamentary candidate, Dr Reuben Ngwenya.
The Head of State said the reports were 'distressing and agonizing'.
"I am deeply concern with the development, I don't know who started  (the rumour) it here in our country but I understand that it originated from Mozambique," he said.
Mutharika disclosed that he will be visiting the hotspot districts from 13 to 17 of October to address the issue.
"After sending some delegates, (to sensitise the villagers) the rumours of vampirism and mob justice is slowly dying down. But I will be there to address the community too," he added.
Chiefs and their subjects in the 'bloodsuckers' hotspot districts of Mulanje, Phalombe and Chiradzulu said they want Mutharika and senior government officials to address meetings to clear the mist.-Online-INTERNATIONAL