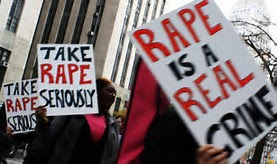 ​
A 33-year-old Mberengwa man was arrested for allegedly raping his 15-year-old sister-in-law in the bush and later locking her in his bedroom. The man, from Dabula Village under Chief Muposi in Mberengwa, appeared before Mberengwa resident magistrate Evia Matura last week, facing one count of rape.
He pleaded not guilty and was remanded in custody to 28 October for trial.
In his defence, the man told the court that he had engaged in consensual sex with his sister-in-law in the bush.
"I had consensual sexual intercourse with the complainant, she knew what we were getting to when we started playing together," he said.
Prosecuting, Wadzanayi Shayanewako told the court that on August 15 last year around 5pm, the accused and the complainant were on their way home from a local business centre.
"While on the way, the accused person dragged his sister-in-law into a nearby bush, ordered her to undress and threatened to hit her with a wooden log if she did not comply," she said.
"In fear, she complied and the accused person tripped her and she fell down facing upwards."
The accused person allegedly raped her once.
The court heard that after raping the complainant, the accused took her to his homestead and locked her in his bedroom. It was not stated in court why the accused locked the complainant and for how long.- By Correspondent. LOCAL