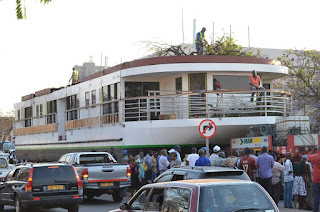 ​The boat passing through the streets of Bulawayo earlier this week

The African Dream, a houseboat believed to be one of the biggest houseboats to have been built in Zimbabwe and has been a spectacle along the country's highways, went through Masvingo and Bulawayo enroute to Victoria Falls, before crossing to Botswana.
The houseboat, with a capacity to carrying 300 people, was built at GDI Engineering, Msasa in Harare. It is now expected in the resort town in a few days' time.
The boat handlers used the longer route to Victoria Falls to avoid traffic congestion that is associated with the Harare-Bulawayo Highway, as that could have resulted in a major disruption of traffic flow. According to crew members travelling with the gigantic houseboat, the journey to Victoria Falls would take a further 10 days. They were moving at approximately 30km/hour .
In Victoria Falls, it will cross Kazungula Border Post into Botswana, where it will be launched onto the Chobe River. The houseboat will operate as a floating luxury hotel — the biggest ever to operate on both the Chobe and Zambezi rivers.
"For the technical mind, the 'ship' will measure an impressive 33.4m (109') in length, with an eight metre beam (26') — wider than the entire road — boasting three spacious decks, of which the upper-most deck will be removed for the journey," according to the Fisherman Magazine.
"Though her total weight once complete is 157 tonnes, she will be stripped to around 100 tonnes for the three-week long road trip."
The boat is being accompanied by a police escort, and a plethora of technicians, including some from Zesa Holdings.
The houseboat carrier will average around 10km/hour, stopping every few kilometres to allow road traffic to pass.
"If you are on the roads in the next three weeks between Harare and Masvingo, or Bulawayo and Victoria Falls, you might need to exercise a little patience," the Fisherman Magazine warned.
The majestic boat has provided a spectacle as road users and on-lookers jostle to take photos.-Online. ENTERTAINMENT