Mugabe govt on the edge 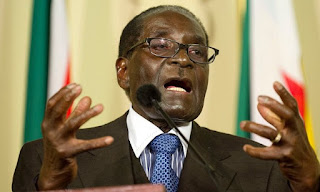 BY STAFF REPORTER
Advocacy group, Media Institute of Southern Africa (MISA-Zimbabwe) has raised a red flag over recent official pronouncements by President Robert Mugabe's government that it would clamp down on journalists and the general citizenry allegedly abusing social media.
The call came ahead of the brutal attack on journalists from the private media who were covering the recent violent demonstrations against economic decay that gripped Harare's central business district last week. Also a reporter, Kenneth Nyangani was arrested this week for authoring a story in which he said First Lady Grace Mugabe donated 'used' underwear in Mutare.
In a statement, MISA said it was disquieted by the string of threats issued against the use of social media by citizens.
This follows a series of threats by Ministers Patrick Chinamasa, Mike Bimha and Chris Mushowe to tighten control over use of social media amid claims that this was the cause of shortages of basic commodities and bank notes in the country.
"The cause was social media, which means that it is a security issue. There is a political agenda, a regime change agenda. We are going to seriously look at what happened with a view to take corrective measures in the security arena. We need to understand social media and the forces behind it…they have given us a timely warning about their intentions and clearly we will take the necessary measures to counter those nefarious activities", said Finance minister Chinamasa.
On the other hand, Energy minister, Samuel Undenge had earlier accused the media of engaging in "unfounded negative publicity meant to discredit government."
These developments came barely three days after Home Affairs minister, Ignatius Chombo issued a press statement on 24 September 2017 concerning press and social media reports on the obtaining socio-economic and political environment.
Chombo is on record accusing  the press and social media of spreading alarm and despondency and warning that  government would take "decisive action to deal a telling blow"  to the perpetrators of crime.
Added MISA; "These statements when viewed collectively appear to hint at the effective position of government on the matter, which position is against the letter and spirit of the Constitution of Zimbabwe.
"The statements pose a serious threat against the exercise of freedom of expression on the part of both the citizens and the media as provided for in Sections 61 and 62 of the Zimbabwean Constitution. The statements are essentially a curtailment of these constitutional rights.
"It is the considered view of MISA Zimbabwe that these statements are calculated to instil self-censorship on the part of both the individual and the media to curb the free flow of information on pertinent socio-economic and political issues.
MISA reiterated its position that citizens have the right to freely express themselves online and offline while the media has the right to truthfully report and inform the nation on events as they unfold without fear and undue hindrances as constitutionally guaranteed.
In a tone that has seen Zimbabwe's economic crisis being turned into factional and succession issue, Mugabe urged his loyalists to expose his supposed lieutenants gone rogue and eyeing his post.
"Those people let us expose and shame them in public, some of them are pushing to have a change of government, so that they can be the new leaders.
"They want to oust the President from his seat, I did not grab power by force, I was elected by the people and it's the power from the people, so I don't want with that power. When the day comes, I will come to the people and say thank you for giving me the power, then hand it back, can you now, elect the person you want to lead you, but, for now, I am going nowhere," he said.
Mugabe, who has been pressured even by his own wife, Grace, to name a successor, received a standing ovation from Cabinet ministers and party supporters when he declared emphatically that he was not loosening his grip on power.
Vice-President Emmerson Mnangagwa has been accused by the likes of Higher Education minister Jonathan Moyo of plotting to take over from Mugabe. POLITICS