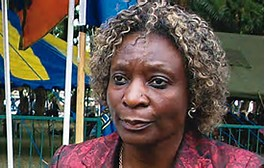 ​JSC secretary Rita Makarau
The Judicial Service Commission (JSC) has requested government to upgrade a circuit court at Mutasa, Manicaland province, to a permanent resident magistrate's court station in its quest to bring justice to the people.
This followed a week-long tour of the province's six court stations by JSC Secretary Justice Rita Makarau and her entourage recently to assess the performance of the courts, challenges facing the stations and to immediately intervene when possible.
The team visited the circuit court premises and discovered that it had all that was needed for a stand-alone permanent court station. JSC deputy secretary Mr Munamato Mutevedzi said Mutasa deserved higher status and the Commission had since made a recommendation to the Ministry of Justice, Legal and Parliamentary Affairs.
"Mutasa is a Circuit Court with a difference," he said. "It has a state-of-the art court house. It is one of the few courts in the country with witnesses' quarters and arguably the second cleanest premises in Manicaland. The Secretary noted the undesirability of the modern infrastructure at Mutasa turning into a white elephant. We have since sent a memorandum to the ministry justifying why we seek resident court status for Mutasa."
Mutasa is a Circuit Court for Nyanga Magistrates' Court. Magistrates travel to Mutasa once a week to deal with criminal and civil cases. If granted Resident Magistrate Court status, Mutasa will be the seventh permanent court in Manicaland.
Provincial Affairs Minister for Manicaland, Mandi Chimene has hailed the development, saying it will bring justice to the people. Minister Chimene said the court station, if established, will cut the distance travelled by litigants to Mutare or Nyanga for some cases.
"We welcome the development in our province," she said. "That is set to mitigate on costs associated with the travel of litigants to either Mutare or Nyanga for some court cases. That is good for us and it will bring justice to the people."
Justice Makarau's tour of Manicaland saw six stations in the province receiving office furniture and equipment as part of JSC's drive to standardise furniture at all courts.
Magistrates' Courts in Rusape, Chipinge, Mutare (Civil and Criminal), Murambinda and Nyanga benefited from the visits. The Commission delivered identical lounge suites for the offices of residents magistrates, photocopiers and visitors chairs.
Justice Makarau is expected to visit court stations in other provinces. LOCAL