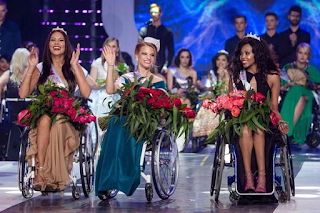 In her elegant dress and perfectly styled hair and make-up, Maria Diaz looks like any beauty pageant contestant — except for the wheelchair she has been confined to since being shot by a stranger 10 years ago.
Maria is one of the 24 young women who gathered in Warsaw last Saturday to compete for the first title of Miss Wheelchair World.
"It doesn't matter who wins the crown. We are all winners," said the 28-year-old from Chile, who is a professional wheelchair tennis player.
"It's our first opportunity of its kind to show the world that we can do anything we want."
Belarussian psychology and social pedagogy student, Aleksandra Chichikova won the crown at a gala evening in the Polish capital.
The contestants presented themselves in national costumes, cocktail and evening dresses.
They also performed elaborate dance routines, some by moving their wheelchairs on their own and others with the help of assistants.
WHEELCHAIR
They talked mostly about their personal experiences, including the challenges of life in a wheelchair.
Finland's Kati van der Hoeven can only talk to her husband by moving her pupils, while Mirande Bakker from the Netherlands is the victim of a doctor's mistake.
Polish kinesiotherapist Beata Jalocha has been confined to a wheelchair for four years after a suicide jumper landed on her.
"It's the first initiative of its kind in the world. The goal is to change the image of women on wheelchairs so they would not be judged solely by their disability," said jury president Katarzyna Wojtaszek-Ginalskaadded, 36-year-old handicapped mother.
Wojtaszek-Ginalska is head of the Only One Foundation, which organised the contest, drawing on experience from Polish beauty pageants for the handicapped.
"It is not the looks that matter the most," she said. "Of course, good looks count but we have focused especially on the personalities of the girls, their everyday activities."
Another goal was to show that a wheelchair is a luxury in many parts of the world.
HANDICAPPED
"It's a common saying of the women that we didn't ask to be handicapped, that we would happily get rid of our handicaps, that we want to be considered ordinary people," she said.
"We are on wheelchairs, but that is a fate that can hit anyone, any time."
To finance the pageant, the small foundation has collected money from private sponsors. But the biggest portion of aid came from the city of Warsaw, which provided the infrastructure, logistical support and helpers.
"The girls only paid for their trip here," said Wojtaszek-Ginalska.
The contestants were chosen either in national rounds or, in countries with no such pageants, by non-governmental organisations contacted by the Polish foundation.
WARSAW
Every country could send a maximum of two contestants, who spent eight days in Warsaw, busy with rehearsals, photo sessions, conferences and visits.
One rehearsal required them to dance to fast music, a task some found impossible. At one moment, a choreographer showing them the movements they were to imitate, cried: "Raise your right hand!"
"I don't have the right hand," American Jennifer Lynn Adams protested from her electric wheelchair, driven with the help of a joystick, to applause from all.
"I was born with partial limbs so I have to be adaptive to the music, to the choreography but that's okay. I live my life adaptively," said the Miss Wheelchair America 2014.-AFP. ENTERTAINMENT