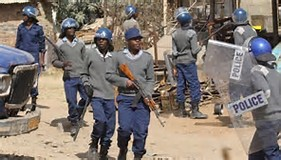 BY MEMORY MAWOYO
Five police officers were this week hauled before the Harare Magistrates' Court facing criminal abuse of duty charges after they allegedly solicited a $200 bribe from an illegal foreign currency dealer they arrested for trading bond notes.
The accused persons were remanded to November 2 on $30 bail each.
The court heard that on October 9 this year, the five accused — Victor Ruzvidzo (34), Evans Tafirenyika (41), Job Mukiwa (32), Kenneth Ndaramo (30) and Freeman Chabvonga (26) -were on duty and deployed to carry out "Operation Dzosa Mari" targeting illegal foreign currency dealers in Harare's central business district.
It was averred the five allegedly arrested Abigail Siyamwaiwa at the corner of Fifth Street and Nelson Mandela Avenue for illicitly dealing in foreign currency.
It is alleged Siyamwaiwa informed Cleotilda Chamboko, the owner of the money of this, and the latter then met up with the five, who were with the arrested suspected cash dealers.
The State alleges the five demanded a $200 bribe from Chamboko in order for her to avoid seizure of her money, which was in Siyamwaiwa's possession.
Chamboko is said to have handed over $200 to Siyamwaiwa for alleged onward transmission to the officers. Chamboko rushed to make a police report at Harare Central Police Station.
Later, Chamboko and some police officers caught up with Ruzvidzo and Mukiwa at Ahmed House, where Siyamwaiwa had been taken to and she positively identified them, leading to their arrest. Tafirenyika, Ndaramo and Chabvonga are said to have handed themselves to the police and the $200 was not recovered.
Linda Gadzikwa appeared for the State while magistrate Josephine Sande presided. LOCAL