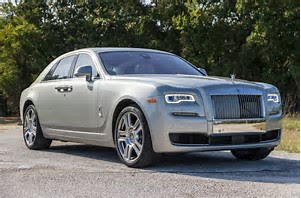 News that President Robert Mugabe's wife, Grace Mugabe, has bought a Rolls-Royce for half a million dollars illustrates the poverty of imagination among our ruling class. They seem to have no respect for Zimbabwe's legacy.
Surely, if they really cared for the country, they wouldn't have bothered with a Ghost but would have collected the two giant Mugabe statues they ordered which are gathering dust in a North Korean warehouse.
After all, what's another Rolls-Royce to the Mugabe family? Only a week or so ago Grace's eldest son Russell Goreraza took delivery of two of them. But he acknowledged that there were other cars on the market and assured everyone that he had an Aston Martin on order.
So why didn't Grace choose a car with more street credibility outside her bling world. In London, as everyone knows, it's all Lamborghinis and Maseratis. Nobody drives a Roller any more. It's as naff as a North Korean statue of Mugabe, let alone two of them.
But a Mugabe statue would certainly have a cachet in enlightened liberation circles. African leaders will walk round and round it in awe. Moses may have had his ten tablets but they would surely have been dwarfed by the two Mugabe statues – especially if they were mounted on top of each other in self-regarding ecstasy.
It was unfortunately not reassuring to us in the diaspora to hear that monumental Mugabe had dismissed the current fuss about the disappearance of money in Zimbabwe and the so-called shortages of fuel, food and medicines as 'a one or two day wonder'. Perhaps it means he has no immediate plans to scoop up the remaining dollars in the market for another shopping trip abroad?
But the arrest mid-sermon of Pastor Evan Mawarire, leader of the This Flag movement, for criticizing the government suggests that the regime is feeling the heat.
An indication of the seriousness of Zimbabwe's economic crisis was given by Finance Minister Chinamasa at a dinner for Afreximbank which has apparently given Zimbabwe a billion dollar loan to stabilise the economy. According to The Herald, Chinamasa appears to have given up on the fantasies of using the money to pay off some of Zimbabwe's debts in order to qualify for new loans from the World Bank. He will instead use the money for 'productivity and economic growth initiatives' .Such as more Rollers?
With Mugabe's friends in North Korea under increased pressure who knows when the eagerly awaited statues will get to Zimbabwe.
Meanwhile, The Vigil's book 'Zimbabwe Emergency' sold well at the first vigil since its launch. It is now available on Amazon. We are also finalizing arrangements for Amazon to print copies to sell on our behalf.-ZimVigil. OPINION