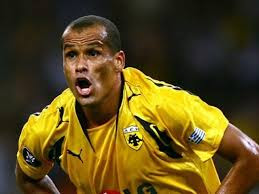 BY ITAI MAZVITA
FC Barcelona legend, Rivaldo Vitor Borba Ferriera, simply known is football circles as Rivaldo, this week toured Zimbabwe to explore ways of improving standards of the sport in the southern African country.
Rivaldo, who met high profile politicians including Vice President Phelekezela Mphoko and Sports minister Makhosini Hlongwane, said he was happy to be in the country where he is likely to establish a sports academy to tap into latent talent.
Briefing journalists after meeting Hlongwane earlier this week, Rivaldo said he would explore his links to get more local players to get into the lucrative and competitive European leagues.
A much-anticipated Warriors-FC Barcelona legends match set for the National Sports Stadium next month is also on the cards following the legendary Brazilian footballer's visit.
"We had a brief discussion with Rivaldo and his team, colleagues from Zifa and the Sports and Recreation Commission (SRC), apart from the much-anticipated match that is coming, the possibility of Rivaldo assisting with linking Zimbabwean players into the European leagues," Hlongwane told reporters during a Press briefing Tuesday.
The 1999 Fifa World Player of year and Balon D'Or winner, who was in the country for the first time, discussed the possibility of pursuing football projects in Zimbabwe with the Sports and Recreation minister at his offices.
"We also discussed the possibility of Rivaldo and his team facilitating in setting up a football academy in Zimbabwe. On his part, Rivaldo pledged to work with us and he is going to look into the proposals that we made to him."
Rivaldo arrived in the country on Monday to promote sports tourism through the exhibition match that would bring a host of FC Barcelona legends into Zimbabwe.
The exhibition match is pencilled for 5 November in Harare.
Speaking at the Press conference, Rivaldo acknowledged that the idea of setting up an academy had been discussed.
Commenting on the exhibition match, Rivaldo said: "I like these kinds of games because I know that many people who love Rivaldo never had an opportunity to see me play. I would like to thank the honourable minister for organising the game and everyone who is involved to make it possible, deep in my heart I am very happy to be part of it."
Rivaldo was born on 19 April 1972 in Recife town, Brazil into a family with three brothers and a sister.
He lost his father in a car accident the age of eight, his father's dream was to see his sons play football. Rivaldo had an extremely poor upbringing in the port town of Recife. His physical appearance still marks the poverty he experienced in his childhood: malnourishment caused bowl-leggedness and the loss of several teeth.
Rivaldo, is regarded as one of the best Brazilian professional football players of all time.
Soccer icon, Pelé named Rivaldo in his 125 Greatest Living Footballers at a FIFA Awards ceremony. SPORTS