Soldier on trial for ivory possession 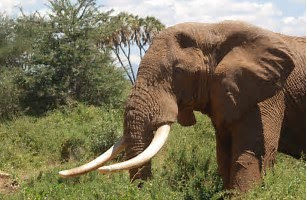 ​
BY VALENTINE MAPONGA
The trial of an army soldier, who was arrested last month on allegations of violating the Parks and Wildlife Act after he was allegedly found in possession of two elephant tusks, has resumed at the Harare Magistrates' Court with the State calling its first witness.
The soldier, Dispace Mukono, who is based at the Zimbabwe Staff College KG-VI, pleaded not guilty to the offence before provincial magistrate, Nomsa Sabarauta.
In denying the allegations Mukono, through his lawyer Twanda Takaendesa, told the court he was offered a lift by an unnamed white man from Mbare suburb to the city centre via Long Chen Mall, where the driver intended to drop off one of the passengers who was aboard.
He said while parked at the Long Chen Mall, a group of police officer arrived and announced that all the occupants in the car were under arrest. After searching the car, according to Takaendesa, that is when the police discovered the said ivory.
"My client was surprised to see a docket being opened against him alone leaving the white man who was the owner of the car. He is of the view that the police officers are trying to protect the white man. We, therefore, pray that he be acquitted," said Takaendesa.
The trial was adjourned since the exhibits officer was not available and trial will continue on 1 November 2017.
Francesca Mukumbiri appeared on behalf of the State.
If convicted of the offence, Mukono is likely to get the mandatory nine-year jail term without an option of a fine.
It is the State's case that on September 17 this year, detectives from the Minerals and Border Control Unit received information that Mukono was in possession of two elephant tusks and was at the Long Cheng Plaza shopping complex intending to sell them.
The State alleges the detectives went there, purported to be buyers and approached Mukono, who at the time, was waiting for the 'buyers' at the mall's car park.
The State further alleges the detectives then identified themselves as police officers before searching his bag, which he was holding, from where they recovered the contraband wrapped in a plastic bag.
Mukono was asked to produce a licence, but failed to do so, leading to his arrest. The recovered tusks weighed 3,67kg and were valued at $623, 90. LOCAL