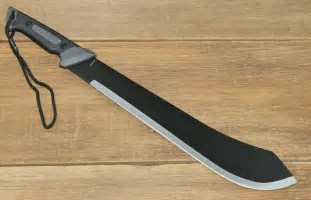 BY MICHAEL MAGORONGA
A teacher from Torwood subrburb in Redcliff is battling for life following a gruesome attack by unknown assailants while on his way home from a beer drink.
The Drake High School teacher, only identified as Musvora, was reportedly referred to Parirenyatwa Group of Hospitals in Harare after being admitted at Kwekwe General Hospital following the incident last week.
Midlands acting police spokesperson, Assistant Inspector Ethel Mukwende said she had not received the report when contacted for comment. Midlands provincial education director, Agnes Gudo also professed ignorance saying she was yet to receive a report on the matter.
Redcliff deputy mayor, councillor Vincent Masiiwa confirmed the report, saying the unfortunate incident was part of a series of escalating machete wars that have lately taken Redcliff, especially Torwood by storm.
"It is unfortunate that such things are still happening in our society. Given that the teacher did not provoke anyone, and was attacked for no reason is definitely sickening," said Masiiwa.
He said on the day, Musvora was drinking alone while his would-be attackers were also drinking separately in the same bar.
"The group then began fighting amongst themselves, before taking their fight outside the bar," added Masiiwa.
Sensing danger, the teacher decided to leave the pub but was beaten up as he tried to make his way home.
"It seems they were targeting him for yet-to-be established reasons because it seems it was a plan in a bid to ambush him and probably rob him," added another source.
The case is said to be just a tip of the iceberg.
Last Saturday, Torwood resembled a war zone as two groups of machete-wielding artisanal gold miners clashed in the suburb.
Reports are that a group hailing from Grasslands, a resettlement area near Torwood, was defending its territory from a Mbizo group that has invaded the gold-rich locality.
Running battles reportedly left three people seriously injured. LOCAL