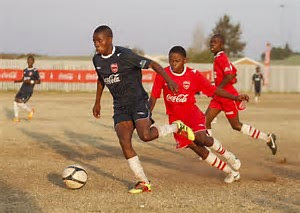 COPA Coca-Cola Under-15 boys winners, Rusununguko High School, provided the bulk of the players in the Dream Team, which will represent the country in a one-week global camp in Durban, South Africa, which started Wednesday.
The Mashonaland East school, who won the local tournament in July after beating Chipundura, has four of the eight selected players, who will compete with other countries including hosts South Africa, Russia, Nigeria, Tunisia and Kenya.
The squad was selected at the July tournament, with 20 players, which has been trimmed to the seven travelling squad and will be mentored  by Rusununguko coach, Eremu Joseph Madzinga.
In South Africa, teams are going to compete in five-aside matches.
According to organisers, Delta Beverages, the players, apart from playing against other nations, will also have the opportunity to be imparted with mentorship and football skills by professional coaches.
They will tour a number of places including the Moses Mabhida Stadium.
"As the platform where football dreams are made into reality, Copa Coca-Cola once again is offering aspiring Zimbabweans football stars a once-in-a-lifetime opportunity to receive world-class exposure and training from world-class coaches," Coca-Cola marketing activations manager, Vee Chibanda said.
Zimbabwe are former winners of this tournament, getting the gong in 2013.
This year's edition will see Zimbabwe being represented at the tournament by a girls team for the first time.
The girl's team was selected at the Copa Coca-Cola national finals, which was won by Chidyamakono High School, for a record fifth time. The team will be coached by the schools coach, Yeukai Chiruvu.
"Coca-Cola is committed to leveraging football to positively impact youth in communities through its grassroots soccer. Copa Coca-Cola gives teens and budding footballers a platform to nurture and develop their talent into professional footballers. We are excited to announce that starting this year we are taking girls to the camp. We hope this camp will take the boys and girls a step further in their football careers," Chibanda said.
The Zimbabwe contingent is expected to arrive in South Africa tomorrow evening.
Boys squad: Adrian Svidzi, Abel Mawunga, Oscar Magejo, Denzel Marufu (Rusununguko), Clayton Muchemwa, Takudzwa Kawodza (Oriel), Shungu Gato, Takudzwa Dube (Chipindura)
Girls squad: Rutendo Matemera, Atida Nyagudza (Chidyamakono), Fambainashe Mvere (Mpopoma), Praynence Zvawanda (Vainona), Erita Zvenyika, Nokuzola Ncube (Tongwe), Beverly Nyandoro (Sodbury), Letwin Hlongwane (Mwenezi)-Online. SPORTS