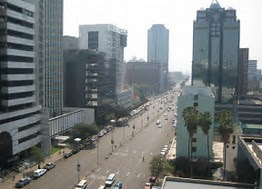 Government has ordered illegal vendors and pirate taxis operating in Harare to relocate to designated sites with immediate effect.
Addressing members of the Zanu-PF Youth League National Assembly from the country's 10 provinces in Harare last week, President Mugabe said the capital city must be the smartest of all the country's towns and it seems his word has motivated the latest crackdown on vendors and pirates.
Harare Metropolitan Provincial Affairs Minister, Miriam Chikukwa, while speaking to the media Wednesday, said the deplorable state of the capital and lawlessness could not be tolerated any longer.
She made the remarks at a briefing attended by the Joint Operations Command (JOC) comprising of the police, army and prisons. Also present were officials from Harare City Council (HCC) and the Environment Management Agency (EMA).
Chikukwa, however, did not specify the punitive measures which the city will take in the event that vendors and pirates resist the move to drive them out of the city.
"I am instructing everyone vending illegally and operating kombis and mushika-shika (pirate taxi) using undesignated routes within the CBD area to move to designated areas as stated in their letters from the Harare City Council," said Chikukwa.
Council, she said, had since established designated sites away from the CBD for inter-city and rural termini.
These include Corner Dieppe and Seke roads; Corner Simon Mazorodze and Chitungwiza Road; Corner Rotten Row and Coventry roads; Golden Quarry road site near National Sports Stadium; and Robert Mugabe road terminus opposite Rhodesville Police Station.
She said the increase in illegal vending sites, including illegal pick-up and drop-off points by commuter omnibuses and pirate taxis in the CBD, had resulted in traffic congestion and wanton loss of lives.
The minister urged vendors and transport operators to approach the HCC in order to be registered and allocated vending sites and operating routes, respectively. The local authority was also directed to ensure that vendors comply with the city's by-laws.
"They should, with immediate effect, stop plying undesignated routes and pick-up points in order to decongest the CBD." TOP NEWS