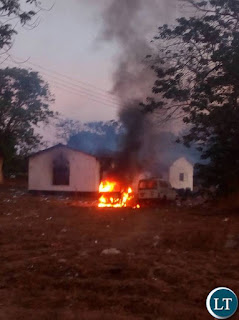 Mufumbwe villagers set alight Mufumbwe Police Station following attempts by police to stop what is locally called "chikondo", a traditional belief meaning "a moving coffin" from taking place after the death of Martha Mingochi of Kakilufya area of Mufumbwe district, a Grade 11 pupil at a local secondary school who died recently.
When police advised the villagers to stop the procession, the angry mob threw stones at officers, prompting them to retreat and seek shelter at the station. However, the marauding crowd pursued the officers and burnt the premises and in the process, two vehicles and office materials were also gutted.
The mob was hunting down a suspected wizard whom they accused of having caused the death of the deceased but by the time of the incident, they had not yet found him.
Some police officers were injured in the melee and were identified as Constable Kamwengo, Sergeant Tembo and Reserve Constable Munangandu.
Two cars, a Canter belonging to Inspector Kalunyange and a Toyota Noa , property of Nkinke Nelson which was parked at the station by Court Bailiffs were also burnt.
Police spokesperson, Esther Katongo expressed her disappointment over the incident.
"As Zambia police, we register our disappointment at the continued behaviour by members of the public of venting their anger on public property in instances where they feel aggrieved. Such practices are detrimental to the wellbeing of the economy and as police we will not allow people to disregard the law with impunity," Katongo said.
"The matter will fully be investigated and anyone that will be found wanting will not be spared but arrested and prosecuted. Destroying of police stations does not disadvantage police officers but the same members of the public who instigate or take part in destroying the infrastructure."
She warned, "We will not leave any stone unturned in our investigations until all those that played a role in this matter are brought to book."-Online. INTERNATIONAL