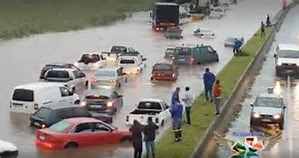 ​Some of the damage caused by the deluge

Heavy storms hit across Beitbridge district this week and left a trail of destruction with 20 houses, three schools and several roads badly damaged.
Beitbridge district administrator Kilibone Ndou-Mbedzi said although no deaths or injuries were reported in the two days of heavy falls, the damage in some cases was extensive.
"A team has gone out to assess the damage. On the first day damages were in Beitbridge West and storms shifted to the east on Tuesday night," she said in an interview.
"Chabeta and Dumba schools were damaged extensively. Roofs were torn away by wind. At least 17 homes have been reported damaged," Ndou-Mbedzi, who is also chairperson of the district Civil Protection Unit, said.
Rodney Mbedzi, a former MDC-T councillor for ward 11 in Beitbridge West, said at least 17 homesteads in the Malusungane area, Malibeng and Chabeta schools were extensively damaged.
Low-level bridges were reported flooded by flash floods while roads were badly eroded.
"Some villagers are in the open as we speak and need help immediately," he said.
The rains, which in some cases reached 45mm, swept across the district and came as a relief to livestock farmers.
"This is the first time we have had such early rains in a long time and it's a bit strange," former councillor Mbedzi said.
Weather experts have warned farmers against early summer cropping, saying the current storms did not signify the beginning of the rainy season.
Durban was last Saturday counting the cost of a storm that left at least five people dead and a dozen injured.
The storm that ripped through the Durban area on Friday night delivered a deluge of rain and hail with strong winds that uprooted trees and collapsed walls.
One of those walls collapsed in Durban's Westville suburb killing a 55-year-old man.
ER24 spokesman, Werner Vermaak said paramedics at the scene were informed that the man, another adult and two teenagers were inside and went to inspect the wall before it collapsed.
"At this stage it is not clear if they suspected damage to the wall and thus went to investigate. The wall collapsed on the man and pinned him under the rubble and water for some time."
KwaZulu-Natal Emergency Medical Service (EMS) spokesman, Robert McKenzie said two people were hit by lightning in Verulam, while another two were killed in a lightning strike in Mayville.
He said EMS paramedics attended to at least another 13 people injured in the storm as a result of walls collapsing, roofs being blown off or collapsing, or trees falling on them.
On Saturday morning residents across the region could be seen removing branches that had fallen on fences, driveways, and roofs.
Roads were littered with debris from the storm and numerous roads had soil deposited by water.
Shopper's at Durban's Pavilion Shopping centre had to walk through water to get to their favourite shops.-Online. TOP NEWS