Zambezi Cheetahs on the radar 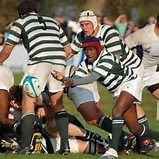 Zimbabwe's rugby heroes — the Zambezi Cheetahs — continued to bask in the glory of their qualification for the 2018 Rugby World Cup Sevens, with the Government this week hosting a reception for them and underlining a commitment to ensure their preparations for the global showcase receive adequate support.
Rarely have the Cheetahs been given due recognition even when they do well in different regional tournaments. But it is the manner in which they fought hard to secure a place at the World Cup in the United States next year that has forced attention to shift to their exploits at the Africa Cup in Uganda.
Sport and Recreation minister, Makhosini Hlongwane hosted the triumphant Zambezi Cheetahs at a dinner in the capital.
Hlongwane said rugby had been on Government's radar from the time they had stepped in to help restore sanity at the ZRU, which culminated in the appointment of an interim executive led by former Sables winger Russell Karimazondo.
Crucially for Cheetahs coach, Gilbert Nyamutsamba and his charges, the government insisted they would play their role to support their quest to make an impact at the World Cup and in the World Series earlier in Hong Kong.
"As government we take notice of the achievements of this team. These days rugby is on the dashboard of government and we support you all the way. We are appreciating that good work.
"We like it that our national flag was hoisted in Kampala and that our national anthem was sung there. As government, we want to thank you for the job well done. We are going to support you all the way. We always advise national associations to work with corporates so that resource mobilisation is easy but wherever possible government must always step in and support Team Zimbabwe," Hlongwane said.
The minister also challenged the Cheetahs to ensure that they make an impact at the World Cup.
Sports Commission board chairman, Edward Siwela said it was imperative that associations invest in development structures that would reap rewards such as the glorious achievement by the Zambezi Cheetahs.-Online. SPORTS