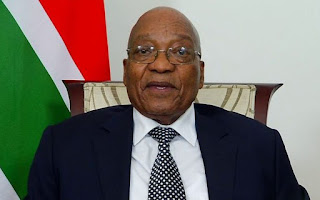 South Africa's Supreme Court of Appeal has ruled that President Jacob Zuma can face prosecution on almost 800 charges of corruption relating to a 1990s arms deal.
Zuma had lodged a challenge at the court in Bloemfontein after a lower court decided in 2016 to reinstate charges that were previously dropped by prosecutors. The National Prosecuting Authority must now decide whether to pursue a prosecution.
"The reasons for discontinuing the prosecution . . .do not bear scrutiny," said Supreme Court judge Eric Leach, delivering a ruling that the presidency described as "disappointing".
The president has always insisted he is innocent of the allegations that date back to when he was rising through the African National Congress (ANC) party. Zuma could now contest the ruling by appeal to the Constitutional Court.
"The decision of the Supreme Court of Appeal today, whilst disappointing, was much anticipated," said a statement from his office.
Zuma and other government officials were accused of taking kickbacks from the $5 billion (4.2 billion euros) purchase of fighter jets, patrol boats and other arms manufactured by five European firms. – AFP. INTERNATIONAL