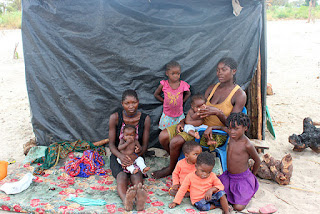 ​Elizabeth Kampanza (brown top), her sister and six children outside their shack

She had her first child at 15, and now at 22, Elizabeth Kampanza is a mother of six children. Had it not been for death which claimed one, Kampanza, who stays in the Ndama informal settlement at Rundu in Namibia would have had seven children.
The children are aged seven, four, two years and six months old. Kampanza had three sets of twins, and one other child. The child who died was a twin.
Although the unemployed mother is happy to have such a big family, poverty does not seem to be kind. The shack in which she lives is barely big enough for the children, herself and two others.
Kampanza lives in a structure made from black industrial plastic sheets, sticks and zinc sheets for the roof.
The family has no electricity, and they walk for about 30 minutes to fetch water at a nearby church, where Kampanza pays about N$100 per month for the service.
The household relies on the N$1 200 disability grant Kampanza's sister Felistus receives for a mental condition she suffers from. Kampanza said the father of her children is Joachim, an Angolan who has since returned to his country.
Joachim left when she was five months pregnant with the last set of twins.
With the father of the children gone, Kampanza said life is tough, and she does not want any more children.
Joachim used to provide for the family from the money he made from doing odd jobs, she added.
Rundu Urban constituency councillor Vicky Kauma has helped a few times, but most of the times, Kampanza hopes that the community would help too.
When times are hard, she has no choice but to breastfeed the four young children.
"They are my children, and I have to carry the burden of providing for them. They are not heavy."
Her worry now that the rains have come is the children's health because the shack cannot withstand heavy winds, and the roof leaks.
"I do not plan on having any more children anytime soon, even though I am not on contraceptives because I cannot access health facilities. But no more babies for me", she stressed.
Life was better when Kampanza's mother stayed with them before she moved to Windhoek to join her husband last month, she said.
Now, Kampanza hopes her mother will help with the younger children by taking them to Windhoek.
Their grandmother raised Kampanza and her sister in one of the remote villages of Divundu.
She said after her grandmother's death, they could not stay in the village because of misunderstandings with some of her uncles.
After this experience, she is philosophical: "I warn all young people about the dangers of having babies at a very young age."
If things were different, she would have wanted to become a nurse. Currently, Kampanza has no dreams, primarily because she never attended school.
She spends her day at the shack, or visiting friends.
"Surviving is difficult, but we make it from day to day," she lamented.
Some good Samaritans have contributed about 200 bricks for her to build a better shack, as well as given them blankets, clothes and food.
Her sister, Felistus, who is 16 years old, recently started attending school at the Panduleni Private School.
Felistus is now in Grade 2, and pays N$20 per month for school fees. She aspires to become a teacher after completing school.
Paulin (24), is a neighbour of the Kampanzas. She is also pregnant, and hangs around for some moral support and advice.
"I love Pamela (Elizabeth), and hang around when I am not at school. I love her company and sense of humour," she stated. Paulin is a part-time student at an agricultural college near Divundu.
The Namibian reported in 2012 about the high rate of teenage pregnancies in the Kavango region from a study conducted by the United States Agency for International Development (USAID). That study revealed that the teenage pregnancy rate in the Kavango region was double the national average, standing at 34 percent among the 15 to 19-year age group.
The national average teenage pregnancy rate is 15 percent.
Presenting the findings, USAID technical adviser on HIV-AIDS, Mbayi Kangudie, said in sub-Saharan Africa, the main drivers of teenage pregnancies were poverty and a lack of education.
According to last year's study, 91 percent of pregnancies among young women in the Kavango region were unwanted. The study found that 98 percent of young people were informed about contraceptives, but only 8,7 percent of them used them.
The majority of the men responsible for these pregnancies were schoolmates, teachers, construction workers, farm workers and Namibian Defence Force (NDF) members.
The negative attitudes of nurses, who allegedly victimise girls whenever they go to health centres seeking contraceptives, was also found to have contributed to the high number of teenage pregnancies in the region.-Online. INTERNATIONAL