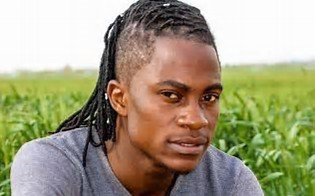 ​Andy Muridzo
BY NEWSANCHOR CORRESPONDENT
Popular musician, Andy Muridzo had to sprint for dear life in a manner that would leave world sprint record-holder Usain Bolt green with envy after angry fans, mostly school pupils, manhandled and threw missiles at him for arriving late for a family show in Banket.
The incident happened on Saturday at Banket Primary School where the institution hosted a fundraising gala.
Muridzo, who was supposed to start performing at 12pm, only arrived at the venue after 3pm thereby courting the ire of his expectant fans who had patiently waited for their idol.
Muridzo's attempt for a grand entrance back-fired for the Dherira hitmaker after he went into the stadium where he wanted to greet his fans only to be met by angry followers who beat him up while others pelted him with objects that included empty bottles.
The dread-locked musician took to his heels with an angry mob in hot pursuit and had to seek refuge in the hostels.
Security personnel, who included ZRP officers, frantically tried to subdue the marauding crowd in a melee that lasted 30 minutes before sanity was restored.
Muridzo, however, made a bold decision to return to the stage where he played before the same crowd and performed to expectations playing his popular hits and cover versions.
In an interview with NewsAnchor after the show, Muridzo conceded he was to blame for the fracas.
"I was to blame for the incident. I arrived late since I encountered problems with transport logistics along the way," said the talented artist, who is part of award-winning contemporary musician Jah Prayzah's Military Touch Movement. Jah Prayzah was also recently assaulted at his former security aide Cris Nyemba's funeral for allegedly failing to buy beer and food for mourners.
Meanwhile, sungura music exponent, Peter Moyo had a fruitful outing playing at DT Voltage Nightclub in Banket on the same night despite a power outage that lasted almost 15 minutes that threatened to mar the show.
The blackout, sources said, was because proprietors of the venue had not 'juiced up' their pre-paid electricity.
The prepaid power ran out as the Young Igwe was in the midst of his act in the tiny venue. ENTERTAINMENT