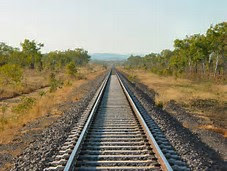 ​Railway line
BY NEWSANCHOR CORRESPONDENT
A 26-year-old man was found dead in Banket with mutilated body parts along a railway line, suggesting he could have been hit by a passing goods train.
The deceased, who was found dead last Friday, was identified as Ephraim Marowa.
A National Railways of Zimbabwe (NRZ) guard, Tawanda Machobani, reportedly discovered the body, with an amputated right hand which was slit at the wrist and shoulder blade, at around 9am the following morning while conducting routine patrol duties before reporting the matter at Banket Police Station.
Mashonaland West provincial police spokesperson, Inspector Clemence Mabgweazara confirmed the incident.
On the fateful day the now deceased wanted to deliver his maize to Banket Grain Marketing Board depot using an unmarked vehicle but his maize was rejected around 1400hrs after it was deemed it contained foreign bodies such as stones.
"Marowa who was reportedly drunk sat outside the depot near the main entrance where he was vomiting whilst he continued drinking alcohol. At 1900hrs a GMB security guard Itai Tsurai found the now deceased asleep near the gate and told him to wake up before asking him to leave the premises and Marowa walked towards the railway line," said Mabgweazara.
A goods train passed through the area around the same time Marowa proceeded in that direction. Marowa's body was found with deep cuts at the back of head and mutilated right hand. His body was conveyed to Banket District Hospital for a post mortem.
Mabgweazara said investigations are still in progress and called for the public to identify and assist people with social problems as some of them would require pyscho-social help. LOCAL