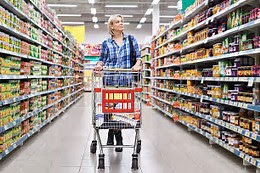 ​Shopping has become a nightmare for many

The Consumer Council of Zimbabwe (CCZ) says weekly surveys have shown an upward trajectory in the prices of basic commodities triggered by the September 23 panic buying, urging consumers to tighten their belts.
Prices of basic commodities shot up last month following social media messages warning Zimbabweans of a looming shortage reminiscent of the 2008 era.
CCZ executive director, Rosemary Siyachitema told delegates at the Buy Zimbabwe retailers and suppliers' conference recently that prices were going up despite denials.
"Now if someone can put a message on social media that causes havoc, it means there is confusion already. It just does not happen when people go filling up trolleys with goods. It's because people don't trust you already. This trust issue has always been a subject that is talked about and between you producers, retailers and manufacturers and the banking sector. So it means that things are not okay already. Then we say social media has been wrong it's not happening [prices are not going up], but prices have not gone back to the levels they were before September 23," Siyachitema said.
"They have stayed higher and they are still going up as we have been doing our price surveys every week. Years ago I was a student then and they were talking about International Monetary Fund Economic Structural Adjustment Programme (ESAP) and they said consumers tighten your belt. We have an ESAP and we tell consumers have to tighten your belts."
She blasted retailers for failing to reduce the price of meat even after the reversal of Statutory Instrument 20, which had promulgated tax on certain meat products.
"All the time when policies come out which always come when producers, retailers who has been sitting in harmony with ministers to say we want the following things. You say you want SI 20, when meat goes up from $4 to $8 per kg and there is a policy reversal and prices don't go back to where they were. You are the ones who are proffering these policies that don't seem to be solving your problem and what do you expect consumers to do," she said.
Siyachitema said there was no synergy between retailers and manufacturers, resulting in misinformation about the availability of certain products on the market.
"You talk about synergies between retailers and manufacturers; it's not there and there is a gap. We know that you are not producing what is demanded by the consumers. So September 23 happens and there is shortage of cooking oil in the shops and manufacturers come on television and this is not scientific, we relate to what we see. You show us all these boxes of cooking oil and you say they will last until December. Only a week or so after the 23rd, we are told again there is a shortage of cooking oil because manufacturers said they are not getting sufficient foreign currency. Where are those boxes that you showed us on television that were supposed to last until December. You know it's all very confusing," she said.
Confederation of Zimbabwe Industries president Sifelani Jabangwe, however, said only a few commodities have gone up adding that genuine retailers did not increase prices to astronomical levels.
"The majority of basic commodities have not gone up. When we did our survey at most the price increase was about 10-25%.The issue is sometimes it is a corner shop or a person is seeking to profiteer," he said.-Online. LOCAL