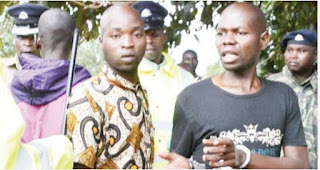 ​Two of the three suspects handcuffed

Three suspects arrested for unlawfully exhuming a human corpse contrary to Sections 131 (b) and 404 of Malawi's Penal Code have been convicted  by the Blantyre Magistrate's Court which was sitting at Muloza Magistrate's Court in Mulanje district .
Presiding senior resident magistrate, Viva Nyimba heard that between April and May this year, the three; Thomas Ndini (36) from Gladstone village, Enock Banda (26) from Manyamba village and Jonas Ogara (32) from Chibade village, connived to unearth Chosadziwa Kaunda's body. The deceased, a 16 year-old albino girl, died in 2016 due to natural causes.
Kaunda's remains were buried at Chibade village, Njema in the district.
Of the three suspects, Ndini and Banda confessed to conspiracy to unlawful exhuming the body, but all three convicts denied any involvement in the criminal act.
But prosecution evidence tendered in court suggested that on 30 May this year, the deceased's mother, Irene Moses, was notified by village head Chibade that unknown people had tampered with the concrete tomb of her late daughter's grave and that her body had been removed.
Chibade then instituted a manhunt for the suspects throughout the district in view of the then mass killings and violent acts against Malawians living with albinism over unfounded myths that the sale of albino body parts leads to huge financial gains.
However, the search proved futile and the village head reportedly ordered his subjects to rebury Kaunda's empty coffin.
According to police, the body has never been traced to date as the three still deny knowledge of its whereabouts.
Five witnesses including Chosadziwa's mother, Irene Moses, village head Chibade and Benson Maduka, who the three are alleged to have confided in of their plans to exhume the body, were summoned to court to prove the case.
Court documents established that prior to the exhumation, the convicts had made several attempts to persuade Maduka to be party to the plan, but he refused and later exposed the plot to Chibade who took the matter to Mulanje Police.
Nyimba observed that most of the evidence against the accused corroborated with Maduka's statement.
The magistrate, therefore, convicted them on a charge of conspiracy to exhume a dead body in accordance with Sections 259 and 260 of the Criminal Procedure and Evidence Code.
Nyimba has since reserved his ruling to November 17 this year to allow both the prosecution and defence prepare for final submissions ahead of the sentencing.-Online. INTERNATIONAL