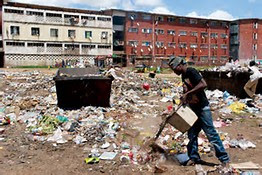 BY NEWSANCHOR REPORTERS
The Harare City Council has decommissioned at least three contaminated boreholes in the high density suburb of Mbare, Harare's oldest settlement, in the wake of the recent typhoid outbreak.
At least 30 people from the populous suburb were recently treated of typhoid, according to the Harare City Council's health department.
A snap survey in Mbare this week revealed that Harare Water had begun decommissioning work on three contaminated boreholes and other unsafe water sources blaming them for causing the recent outbreak.
Community Water Alliance programmes manager, Hardlife Mudzingwa implored the council to work on improving planning and delivery of quality of water and ensuring that potable water is accessible from taps.
"The decommissioning of several boreholes in Mbare should be accompanied by availing of alternative source of potable water," said Mudzingwa.
In a recent Facebook post Mudzingwa wrote, "Borehole contamination in Mbare. Those who are free to go to Chishawasha Flats and see for yourself, residents in Mbare are drinking glorified sewerage. Haasi ma vendor akukozera typhoid please (Vendors are not responsible for the outbreak)."
The recent outbreak of typhoid in Mbare, Epworth and Hopley has been blamed on poor hygiene issues including illegal vending.
Over 30 cases of typhoid were confirmed in Mbare as of this week, while three patients were still admitted at Beatrice Road Infectious Hospital after the setting up of a 24-hour clinic to manage the typhoid outbreak, City of Harare's Health Services director, Dr Prosper Chonzi, told journalists at a media briefing.
Chonzi said the city had managed to contain the outbreak as there were no confirmed deaths so far.
Suspected typhoid cases were 301 while the numbers of people coming through treatment camps at Matapi Hostels was decreasing, he said.
"As I speak, we have only three patients admitted at Beatrice Road Infectious Hospital where we admit our sick patients. This means that people are heeding our calls on safe hygienic practices," Chonzi said.
"Instead of the initial 160 patients that were coming for screening on a daily basis, the numbers have reduced to 50-60 per day. To date, suspected typhoid cases are 301. The ones that are confirmed to be having typhoid are over 30. We have not had any confirmed death from typhoid. In an outbreak situation, we carry out investigations and analysis to verify the cause of deaths."
Chonzi implored residents to practice good personal hygiene like washing hands after visiting ablution facilities, buying food from licensed premises as well as using aqua tablets to treat water.
Central government is obliged under Section 301(3) of the Constitution to allocate five percent of the national budget to local authorities for service delivery needs. TOP NEWS