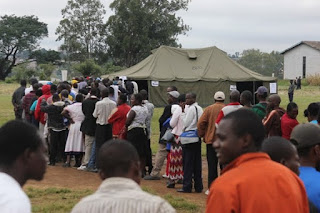 2 November 2017 – The Zimbabwe Election Support Network (ZESN) a coalition of 32 Non-Governmental Organisations promoting democratic elections in Zimbabwe is observing the Biometric Voter Registration (BVR) exercise which commenced on 10 October 2017. The Network will deploy a total of 2000 observers to cover all the Four Phases of the BVR blitz, to date 938 observers have been deployed.  With Phase 1 (One) having been concluded on 25 October 2017, ZESN observers under this Phase reported on a number of issues, including the intimidation of registrants and observers, inadequate voter education and mobilisation, challenges with services of Commissioners of Oath who were not always present at most registration centres.

Misinformation
ZESN received disturbing reports of cases where potential registrants were being misinformed that the BVR system has the ability to reveal voters' preferences on voting day. There is need for ZEC and other electoral stakeholders to amplify civic and voter education efforts in order to demystify the BVR and ensure that voters receive accurate information which will allow them to make informed choices.

Creation of a conducive political environment
ZESN reiterates its calls for the establishment of a conducive political environment devoid of intimidation and violence during the registration exercise and during the period leading to the 2018 elections. ZESN urges ZEC to facilitate the creation of Multi-Party Liaison Committees (MPLCs). MPLCs would be an appropriate platform to elicit the support of politicians in adhering to the stipulated code of conduct for political parties in all electoral processes.

Recommendations
1.      The ZHRC and ZEC must investigate the incidents of intimidation of registrants and the distribution of pre-filled affidavits by political parties and traditional leaders.
2.      There is need for standardization of operations for all BVR Ward Supervisors with regards to how they relate with observers to ensure that there are no obstructions to the work of observers during the registration process.
3.      Disaggregated Statistics of registered voters should be availed on a daily basis to observers and interested stakeholders as a way of enhancing transparency and accountability as well as to inform stakeholders involved in civic and voter education to make appropriate adjustment to voter education interventions.
4.      ZEC should facilitate the creation of Multi-Party Liaison Committees that will discuss issues related to political parties, actors and supporters adherence to the stipulated code of conduct during the registration period.
5.      ZEC should issue periodic updates and briefings to address deliberate misinformation by some political parties regarding the importance and purpose of the BVR exercise.
6.      Recognising the important role that the media plays in electoral processes, ZESN calls upon the media to augment efforts by ZEC and CSOs in providing accurate information to demystify the BVR process and to encourage all eligible citizens to turnout in their numbers to register.
7.      ZESN recommends that ZEC engages organisations working with people with disabilities in order to facilitate their registration and participation.
8.      ZEC and CSOs should amplify voter education efforts to ensure that the public is well informed about the process and to further reduce the number of turned away potential registrants.
9.      In view of the emerging challenges with regards to the proof of residence, ZESN reiterates its previous position for ZEC to put in place additional mechanisms to further ease the proof of residence requirement such as conferring voter registration officials with powers to commission affidavits. OPINION