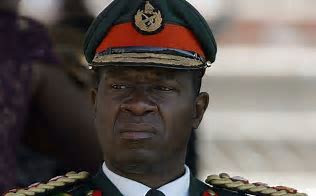 ​ZDF commander, General Phillip Sibanda
BY NEWSANCHOR DESK
Zimbabwe Defence Forces (ZDF) commander, General Phillip Valerio Sibanda has said the success of military operations, including Operation Restore Legacy which forced former president Robert Mugabe to resign last November, was premised on discipline among the army's rank-and-file which the nation must emulate.
"As a country, we need discipline and it should not be viewed or confined to the military. It is something that we need in our homes, communities and everywhere.
"We have seen it work very well in the war, in Mozambique, Congo (DRC), United Nations operations in Angola and you saw it work recently in Operation Restore Legacy.
"Had it been in some countries, there would have been mayhem big time. So, we believe discipline helps."
Gen Sibanda, however, admitted the army's fallibility.
The ZDF boss made the remarks while addressing a gathering in Chinhoyi recently.
During Operation Restore Legacy, Gen Sibanda was head of the Zimbabwe National Army (ZNA) adorning the rank of Lieutenant-General and was rewarded by elevation to a full General, replacing General Constatino Guveya Chiwenga who has now entered mainstream politics as one of the country's Vice Presidents.
The ZDF comprises the army and airforce, while Operation Restore Legacy was executed ostensibly to "remove criminals" belonging to a faction known as G40 which had captured the ageing then President Robert Mugabe. The faction was led by Mugabe's wife, Grace and was angling to nominate his successor.-LOCAL.